Although the RX-78 Gundam is the most famous mobile suit from the original Mobile Suit Gundam anime TV series, it’s not the only giant robot the Earth Federation has at its disposal. As a matter of fact, debuting in the very same premiere episode as the Gundam is the RX-77 Guncannon.

Still, there’s a reason the series, and franchise, is called Gundam and not Guncannon. Aside from being slower and less powerful, the Guncannon can’t compete in the looks department with the dashing Gundam. Simply put, it’s just not sexy enough…at least not without this subtle variation to its paint job with a hidden significance.

For everyone who hasn’t spent their life acquiring an illustrated encyclopedic knowledge of anime robots, let’s take a look at the Gundam and Guncannon, side by side.

As we can see, the Gundam, on the left, has longer legs and lithe limbs, giving it a more graceful and athletic figure. When lined up next to each other like this, the Guncannon comes off looking just a little dumpy.

In light of this, Twitter user and model builder Takuya decided to give the Guncannon a makeover. While he didn’t make the mobile suit quite as colorful as the titular Gundam, he decided to mix things up a little on the Guncannon’s legs, which are ordinarily a single shade of crimson.

But why add two patches of pale paint? The reason lies in the Japanese text in the above photo. It reads zettai ryouiki, which literally means “absolute territory,” but is a Japanese slang term for a strip of exposed skin on a woman’s upper thighs between the top of her socks and the hem of her skirt or shorts. 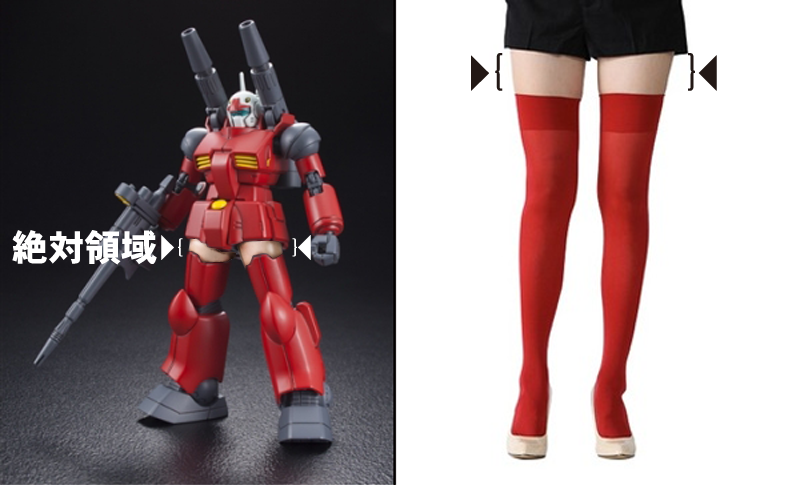 Online commenters had the following to say about Takuya’s risqué creativity:

“That’s awesome. That’s sexy.”
“Looks like a robust woman.”
“Excellent absolute territory.”
“If you’re gonna do this, do it with the [schoolgirl-themed] Nobel Gundam!”

Now we’re wondering if Takuya will do an even more revealing follow-up, using the same-flesh tone to create a sleeveless outfit for the underappreciated Guncannon, or, if he wants to get really daring, a bikini version for summer. Considering the hundreds of different Gundam model kits sold by licensor Bandai, the possibilities really are endless.