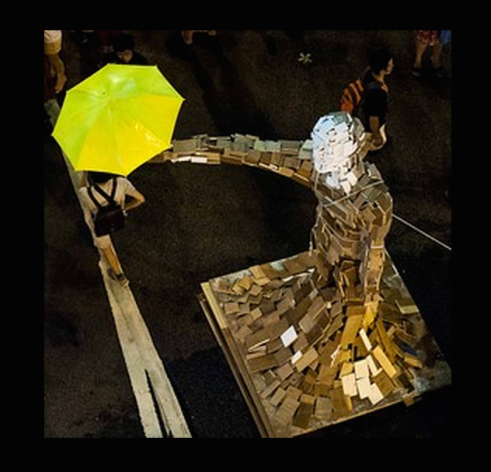 The ‘Umbrella Man’ statue, shown here at a pro-democracy protest site in Hong Kong in October, is one example of locally produced art inspired by the city’s civic unrest.

Once ridiculed as a cultural desert, Hong Kong is now a major destination on the global art circuit.

Buying and selling art fits perfectly with the city’s history as a trading center. But Hong Kong’s local art scene—the one in which local people actually make and enjoy art—has been slower to develop. The Occupy Central protests that paralyzed parts of the city for nearly three months last fall has given Hong Kong a creative boost.

The protests resulted in a number of dramatic images, including umbrellas that protesters used to fend off police pepper spray and the iconic 10-foot “Umbrella Man” sculpture. Before police dismantled the protest sites in December, there was a major effort to preserve the art that had been created.

Hong Kong Arts Center director Connie Lam says social tension is a nutrient for art making. Cosmin Costinas, executive director and curator of Para Site, a nonprofit art space in Hong Kong run by independent artists, agrees. “An active civil society with different ideas is a much more interesting place for diverse art to develop than a closed society where the king decides he wants to build a museum,” said Mr. Costinas.

The burst of creativity could transform Hong Kong from an art marketplace to an arts center akin to New York or Paris. Cities like these have thriving artists’ communities, famous museums, respected art schools and a wide range of galleries. Until recently the art scene in Hong Kong was dominated by high-end auctions and top international galleries, but that is changing with a new art museum under construction and a wave of new galleries.

Hong Kong is now the world’s third-largest art market by auction sales. The total number of galleries in the city has grown from about 10 before 2000 to more than 90 now, according to Hong Kong Art Galleries Association. Western dealers such as Gagosian, White Cube, and Ben Brown Fine Arts have opened galleries in Hong Kong in recent years.

People don’t pay taxes on art in the city, which gives it a huge advantage over nearly every other Asian city. Despite Hong Kong’s notoriously high rent and small spaces, selling paintings can be very profitable. Lehmann Maupin, a New York-based gallery, expected its Hong Kong gallery in the Central business district to break even in two years. It was profitable in the first year, said founder Rachel Lehmann.

“Hong Kong has been recognized as the international Asian art hub,” said Adeline Ooi, Asia director for Art Basel. “Ten years ago it wasn’t the case, now it is very pronounced.”

Meanwhile, local interest in art has lagged behind. When Spring Workshop exhibited a work by top Chinese filmmaker Yang Fudong a few years ago, it had a hard time attracting visitors. The nonprofit art organization sent young women with hot chocolate into the street to bring in visitors, but they still couldn’t convince people to come see the art.

“I am glad that we don’t have that problem anymore, it still makes me cry that we have these beautiful artworks but people don’t want to come to see,” said Ms. Brown, founder of Spring Workshop, located in Wong Chuk Hang, a former industrial town in Hong Kong. The gallery now regularly brings in 800 people a day for its shows.

One of the most memorable visitors, Ms. Brown recalls, was a 60-year old lady who showed up on a Tuesday with two friends wearing backpacks and sneakers. The woman said she had been reading about contemporary art and came to check out the arts space with her fellow retirees. Since then she has returned for several events. “Hong Kong is now ready for a lot more deeper engagement with culture,” said Ms. Brown.

The city has many students studying music and art—some schools even require students to play two musical instruments—but people treat art as something that isn’t accessible by ordinary people. Parents rarely take their children to museums—partly because hasn’t been much to see. M+, the visual-arts museum scheduled for completion in 2018 in the West Kowloon district, should help by giving the city a world-class exhibition space with an important collection.

As the global collecting world descends on Hong Kong next week, bringing with it art valued from hundreds to millions of dollars, it will give residents lots to be inspired by. Two local arts communities will hold their own events to draw in the visitors.

There is at least one show dedicated to the Occupy movement. Kacey Wong, a Hong Kong-born artist, will exhibit photographs in a show called Art of the Protest. For visitors who look closely at the city’s overpasses and sidewalks, stenciled images of umbrellas can still be spotted, the last remnants of the art created during the protests. 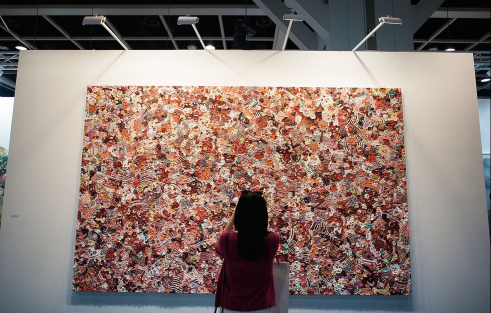 A visitor looked at an art installation at last year’s Art Basel in Hong Kong.

One thought on “As Art Central and Art Basel descend upon Hong Kong next week, will it become Asia’s arts hub?”