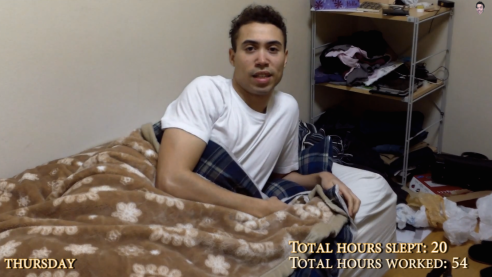 A recent video uploaded by prolific YouTube vlogger Stu in Tokyo has gone viral, so far reaching more than half a million views.

The topic of video? A week in the life of a Tokyo “salary man,” the common name in Japan for a salaried office worker.

Stu works for a British financial services company in Tokyo, he explains in the video. Typically the months of January, February and March are “crunch time,” requiring long hours.

So, Stu decided to keep a video diary of just how much he works each day, and what he actually has time to do after he gets off work. It doesn’t turn out to be much of anything at all.

But that’s okay, says Stu. “There are definitely people in Tokyo who do this all year round in order to support their families. I couldn’t imagine having to do this if I had those kinds of responsibilities as well.”

There are signs this cornerstone of Japanese working corner is in the process of changing. Although current Japanese prime minister Shinzo Abe has floated the idea of eliminating regulations that limit daily working hours entirely, the government has in fact introduced plans to require Japanese salaried workers to take five days of paid vacation every year.

Until now, while many Japanese salaried employees receive paid vacation time as part of their compensation package, very few workers actually make use of it. Due to workplace culture, Japanese workers are reluctant to book vacation time on their own, leaving coworkers behind to pick up the slack. Instead, if Japanese workers do take a day off, they typically take one during one of Japan’s national holidays.

Japan currently has 16 nationally legislated holidays, the most of any G20 country (the UK has only 8 national holiday, and the US 10). The abundance of national holidays in Japan may compensate for long working hours and peer pressure that frowns on taking a day off for personal reasons.

However, when everyone in a nation of 126 million people goes on vacation at the same time on a national holiday, the result can be clogged rail lines, monster traffic jams, and long lines at airports.

The new vacation labor regulations are an attempt at addressing this problem. There is also the hope that mandatory paid leave, combined with the large number of national holidays will spur tourism and in turn encourage consumer demand, stimulating Japan’s sluggish economy.