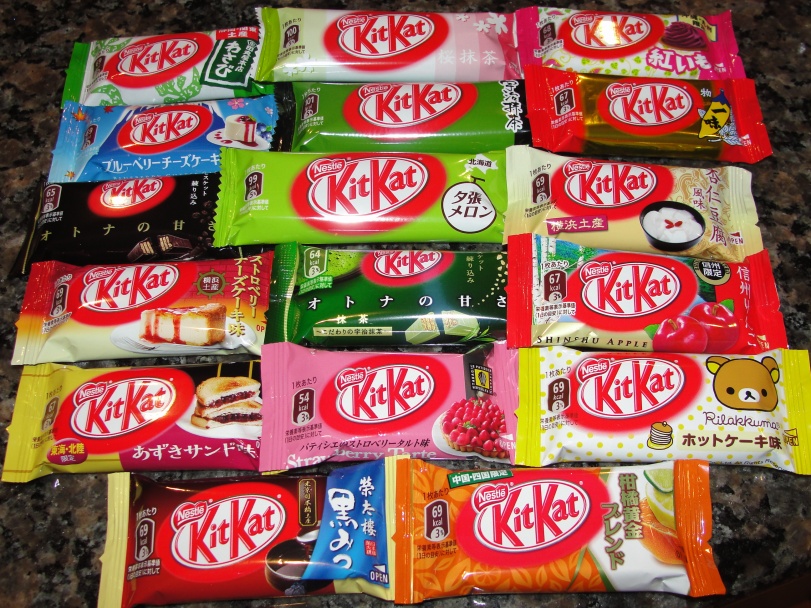 The Telegraph UK (by Danielle Demetriou):

Chef Yasumasa Takagi is hard at work. With a furrowed brow and a meditative air, he stands at his kitchen worktop and surveys a row of glass jars, each containing a rainbow-hued ingredient – green pistachio paste, pink strawberry powder, yellow yuzu citrus fruit. He sprinkles deep-pink raspberry powder into a bowl containing melted white chocolate, before dipping bite-size wafers into the mix and ceremoniously placing them inside a small mould.

The scene unfolding in the kitchen at the back of his upmarket Tokyo patisserie may seem fairly standard for the famed creator of luxury artisan sweets. But closer inspection reveals that the chef is making something perhaps more ordinary than imagined, for he is, in fact, experimenting with flavors for one of the world’s most popular chocolate bars: the humble KitKat.

Few could dispute Britain’s enduring love of – and appetite for – the iconic wafer-finger bar. Launched 80 years ago by Rowntree’s, and touted as the workman’s perfect companion to a cup of tea, KitKat revolutionised the nation’s biscuit-loving society and within two years was a bestseller. Now it is sold in more than 100 countries; 700 KitKat fingers are reportedly consumed every second (totalling 22 billion a year), according to its current owners, Nestlé.

But there is one country in particular, 6,000 miles from its English origins, that stands out in its reverence for KitKat – namely Japan.

Since the first KitKat went on sale there in 1973,  the nation has embraced it, making it one of its  top-selling chocolate brands. While Japan’s KitKat retail sales are a fraction of the UK’s – Y17 billion in 2014, equivalent to £96 million compared to the UK’s £243 million – they have risen steadily since 2011, in contrast to a decline for the past two years in the UK, according to market-intelligence firm Euromonitor.

Such success is clearly tied to the country’s penchant for weird and wonderful flavours – 300-plus exotic varities have been created, from wasabi to melon. Then there are the quirky initiatives:  the postable KitKat with a space on the wrapper  for messages, the KitKat-cum-train ticket, the  KitKat croissant…

KitKat is regarded as a premium confectionery brand in Japan – as reflected in its KitKat Chocolatory stores. Since the launch of the first of these branded boutiques in Tokyo in January last year, a further seven have opened across the country, attracting nearly one million customers, who have spent close to Y2 billion (£10.9 million-according to current exchange rate) on luxury KitKat confectionery masterminded by Chef Takagi.

How has a nation more famed for its appetite for sushi than sweet treats, not to mention its perfectionism in terms of quality and presentation, become one of the protagonists of the KitKat world? The story begins, it seems, with a stroke of luck that is the stuff of marketing dreams: KitKat sounds similar to the Japanese phrase kitto katsu: ‘you will surely win’.

The impact of its fortuitous name became clear around 14 years ago, when Nestlé noticed surging sales every January as customers bought KitKats as good-luck presents for students sitting university entrance exams. Tapping into this trend, Nestlé collaborated with Japan Post to launch the postable KitKat in 2009 – resulting in about half of the nation’s 600,000 annual exam-sitting students now receiving the chocolate for good luck every year. The customer-led initiative is one of a string of innovations that have meant the Japanese KitKat bears little resemblance to its UK counterpart, according to Ryoji Maki, marketing manager for confectionery at Nestlé Japan. ‘We had to differentiate the brand from the start when we realised that the global slogan, “Have a break, have a KitKat”, does not have the same meaning to the Japanese.’

A clue as to just how big the gap is between KitKat in Japan and the UK can be seen on a recent Thursday morning in the basement food hall of the department store Daimaru in Tokyo. A steady stream of people pause in front of the Kitkat Chocolatory concession, which is hard to miss with its red wall of KitKat motifs and sparkling red chandelier fashioned from KitKat moulds. ‘It’s busier at other times,’ says shop worker Mariko Suto, 28, in a cap and striped apron. ‘Queues can last 30 minutes at the weekend.’

Kenichi Seimiya, a 47-year-old sales and marketing executive, sweeps in and chooses four Special boxes in minutes before presenting his gold credit card for the Y3,672 (£20) bill. As staff gift-wrap the chocolates, he says, ‘I’m going on a business trip next week to Malaysia and Thailandand I need  to bring some gifts. KitKat is very famous and the flavours available here are popular outside Japan.’

Another customer, Noriko Inomata, 46, a chic television presenter, takes her time perusing. ‘I came here today because this morning my husband gave me a Sublime chocolate – and I was so surprised at how delicious it was. I had to come and have a look.’

Takagi rustles up such creations several miles across the city at Le Patissier Takagi in Aoyama, a neighbourhood famed for its fashion flagships and high-end eateries. Here, as well-heeled locals tuck into aromatic teas and carefully crafted cakes in the cafe, Takagi explains his unlikely union with Nestlé. ‘At first I refused, because I was approached by many different companies with offers and I wanted to keep my independence. But they were very convincing.’

Key to Takagi’s acceptance was the agreement that his creations would represent the most exclusive end of KitKat Japan. He set to work in his kitchen – which, as he later demonstrates, involves measuring samples (no colourings or artificial flavourings) into bowls of chocolate, before testing them on wafers.

In 2005 his first creation – a passion-fruit KitKat – was selected by Nestlé from 30 new flavours submitted by the chef, with dozens more following since, including plum, passion fruit and chilli, ginger and kinako soybean powder. ‘The challenge is how to make something handmade out of an industrial brand,’ he says. ‘The KitKat has three perimeters: the chocolate, the wafer and the cream. The chocolate and cream are where we can be most creative. For me, my goals are  the same as in my work as a patissier.  I want to surprise people, I want to make them happy and I want to somehow create an emotional reaction.  I’m always looking for new textures and new flavours.’

When asked about the less successful flavours, he ponders briefly. ‘Watermelon is too light. And chestnuts, sweet potatoes and pumpkins are very difficult as their taste is too soft to mix with chocolate.’ His face brightening, he adds, ‘I’d like to do Kyoto pickles next.’

Despite KitKat Japan’s luxury innovations, its successes are not confined to the high-end. Hidden among the heaving shelves of the Shinjuku, Tokyo, outlet of Don Quijote, a 24-hour bargain- store chain, a basement corner appears to have been transformed into a KitKat shrine – with rows of special-offer treats, from rum and raisin flavour to sweet potato.

Yuuma Hirata, the floor manager, says, ‘Lots of Chinese tourists come here, also Koreans and Europeans, to pick up bags of KitKat. The most popular are the matcha green tea – it’s the balance between bitter green tea and chocolate, a good taste for foreigners.’

A short distance away in the calmer confines of Pronto coffee shop near Shibuya station, customers are enjoying KitKat croissants. Available in chocolate, sweet potato and green-tea varieties, the Y180 (£1) pastry, which contains a two-finger KitKat, was introduced in September. It has sold out daily since then according to Pronto, which has 300 cafes across Japan.

The croissant joins a string of KitKat innovations. A KitKat that doubles as  a train ticket was launched last year with Sanriku Railway in northeastern Tohoku to support regional recovery following the 2011 tsunami, earthquake and nuclear disaster. Then there is  the e-commerce store, with customers able to customise KitKat packets with photographs and messages for parties and weddings. KitKat Japan is showing no signs of slowing down: this month, it is launching a run of 500 luxurious KitKats covered in gold leaf.

Even the size of normal KitKats are different in Japan (there are six little fingers rather than four). It is the country’s unconventional relationship with chocolate that enables such innovations to flourish, according to Alex Villela, the French business executive manager for confectionery at Nestlé Japan. ‘Chocolate is a very recent concept in Japan,’ he explains, at the press launch of the eighth Chocolatory  boutique in Tokyo’s Takashimaya department store.

‘Dutch sailors first brought it into Japan hundreds of years ago, but it really only caught  on after World War Two, during the American occupation. The way of consuming chocolate in Japan is quite different from the UK. Because chocolate is very sweet compared to traditional Japanese confectionery, it’s normally only consumed in small amounts and it is still regarded as a treat.’

One thought on “The Telegraph (UK): How the KitKat became a phenomenon in Japan”