Ai established collection points for the Lego bricks around the world earlier in the year, including one at the NGV, after Lego refused to supply him with bricks because the company “cannot approve the use of Legos for political works.”

Constructed on the artist’s behalf by a team of almost 100 local volunteers and arts students, the work “attests to Ai’s long-standing commitment to freedom of expression and human rights,” according to the NGV.

Andy Warhol | Ai Weiwei includes more 120 than works by Ai Weiwei and over 200 works by Andy Warhol, exploring the full scope of both artists’ practice. The exhibition is presented in association with The Andy Warhol Museum, Pittsburgh, with the participation of Ai Weiwei Studio. 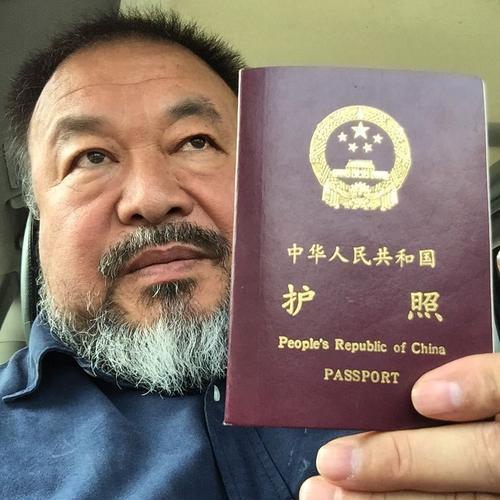 Ai Weiwei will now be able to leave China for the first time in four years as the controversial artist has had his passport returned to him by the Chinese government. Weiwei first had his passport revoked back in 2011 after being arrested and placed under house arrest for 81 days in relation to allegations of tax evasion — just one of his countless run-ins with the regime. At the time of his arrest, the incident saw the artist pleading via video for the return of the passport while fans and protesters launched an “Ai Can’t Be Here” campaign to draw attention to the predicament.

Speaking to The Guardian, Weiwei said he plans to go to Germany to visit his 6-year-old son while the newly-bestowed freedom came completely out of the blue:

I have no idea why. This is not something I can say… I feel pleased. This was something that needed to be done… I think they should have given it back some time ago and maybe after so many years they understand me better.

London’s Serpentine Galleries unveils “Golden Age,” a designer wallpaper by contemporary artist Ai Weiwei. The piece is a social commentary of sorts by the artist and features interlocking gold chains reminiscent of luxurious silk scarves, as well as surveillance cameras surrounding Twitter’s Larry Bird logo. This is possibly an allusion to the ongoing discussion of privacy topics like social media rights and government surveillance issues, as Ai Weiwei is reputed for his critiques on the Chinese government and his longstanding dissidence of the state’s policies.

“Golden Age” and the preview video above will debut ahead of the gallery’s upcoming wallpaper exhibition by artists, designers, architects and the like. The wallpaper collection will be available for purchase this May.

Chinese artist and social activist Ai Weiwei has unveiled his latest public installation at the Vancouver Biennale in the Harbour Green Park. Dubbed F Grass, this piece is 182 square meters and features 1,328 tufts of iron grass that of course spells out the letter “f.” F Grass is said to be a continuation of the artist’s large-scale installation “Sunflower Seeds” as they both share a similar theme – “the relationship between the individual and the collective and the resilience of the human spirit in the face of Chinese government censorship, control and secrecy.”

What’s more is that Weiwei’s studio is located in Caochangdi, Beijing, which translates to “grasslands” in Mandarin, and the slang for the f-word is pronounced the same as the character for “grass.” We’re sort of interpreting this installation as a big ‘f-you China’ all the way from Vancouver.

Last week, China’s State Administration for Press, Publication, Radio, Film and Television (国家广播电影电视总局 / 國家廣播電影電視總局) announced a policy that bans the use of wordplay in media and ads ostensibly to “popularize and standardize the use of the national common language, a heritage of Chinese traditional culture”.  Since Chinese languages, like Mandarin, have a rich linguistic tradition of wordplay based on homophonic puns that, unlike puns in English, are much more ubiquitous and always seem clever and never groan or eye-roll inducing, the edict at first glance seems to be more ridiculous than SAPPRFT’s ban on time travel in TV shows and movies.   It might not be entirely ill-conceived.

The Wall Street Journal’s China Real Time explains one example specifically cited by the Chinese version of the FCC as an “indiscriminate use” of language:

“[T]he phrase “晋善晋美” was used in ads promoting tourism to Shanxi province, widely seen as the cradle of Chinese culture. The slogan — translated as “Shanxi, a land of splendors”–  was a pun on the Chinese saying, “尽善尽美,” which means perfection. The ads swapped out the character “尽” for a homonym, “晋,” a character often used to represent Shanxi.”

The slogan was selected in December 2012 by the Shanxi Tourism Bureau after four months of competition and was heavily promoted on CCTV and other media outlets.  In July 2013, it was reported a fourth grade student mistook the tourism slogan for the idiom meaning “perfection”.

The clever phrase was deemed to “rape” the idiom and sullied Chinese culture.   This pun control can be seen as part of the Central Government’s efforts to promote standard Mandarin.

Many are sympathetic to the government’s concern about the irregular and inaccurate use of characters, especially among children, but find it at odds with linguistic appreciation and development.  Yi Ming (亦鸣 / 亦鳴), a contributor to China Art Newspaper (中国艺术报 / 中國藝術報), praises the slogan as a clever use of traditional culture for a commercial purpose and highlights the charm of Chinese characters.

Li Zhiqi (李志起) chairman of marketing group CBCT, linguistic innovation should be encouraged and new idioms created.  An editorial in Xinhua does not believe in a “one size fits all” prohibition.  The author calls for the SAPPRFT to “seriously listen to the reasonable opinions of language scholars and the public” and believes that people need to keep an open mind about language so that it can develop.

The rule naturally echoes efforts by the government to censor online taboo topics, names, and words which Chinese netizens often circumvent by slyly hiding behind puns.  For example, when the government censored the word “harmonious” (和谐 / 和諧, pronounced héxié) online because netizens began using it as a euphemism for censorship (which the government justifies in order to promote a “Socialist Harmonious Society“), “river crab” (河蟹 / 河蟹, pronounced héxiè) was used as a substitute.

Dissident artist Ai Weiwei later visualized the phrase in an installation and invited supporters to feast on river crabs to protest the government’s demolition of his Shanghai studio.

David Moser, academic director for CET Chinese studies at Beijing Capital Normal University, tells The Guardian, “It could just be a small group of people, or even one person, who are conservative, humorless, priggish and arbitrarily purist, so that everyone has to fall in line…But I wonder if this is not a preemptive move, an excuse to crack down for supposed ‘linguistic purity reasons’ on the cute language people use to crack jokes about the leadership or policies. It sounds too convenient.”

The Chinese artist/activist has filled each fixture with an abundance of porcelain flowers, bringing an artistic delicacy to the defunct objects. Interpretations have suggested a political undertone behind the floral arrangement, namely a reference to China’s 1956 “Hundred Flowers Campaign,” in which the government briefly allowed free expression on the communist regime that was then cut short by a crackdown on dissidents.

“Blossom” is a part of WeiWei’s art exhibition @Large at Alcatraz Island in San Francisco, which will run until April 26, 2015.

The latest project from Chinese artist Ai Weiwei comes courtesy of a box of designer pieces from emerging brands stocked at Dover Street Market to photograph for V Magazine. Given free reign to shoot “in whatever manner he chose,” the thought- provoking artist chose to stand the models on pedestals while wearing items from the likes of Hood By Air, Gosha Rubchinskiy and more, as buckets of paint were then poured onto their heads. These images were taken mid-pour and thus the chaotic yet beautiful nature of the splashes were frozen in time to create a compelling fashion editorial for the publication’s latest issue.

Enjoy the images and keep an eye out for the print to hit stockists on November 13.

The big man of Beijing’s new show fills the former prison with a giant rainbow dragon and Lego models of 175 prisoners of conscience, from Nelson Mandela to Edward Snowden. The artist’s bravery and commitment are extraordinary.

Go behind the scenes of “@Large: Ai Weiwei on Alcatraz.”

The artist raises urgent questions about freedom of expression and human rights in this exhibition of new work created for Alcatraz, on view September 27, 2014–April 26, 2015.

Controversial Chinese artist Ai WeiWei is set to launch “@Large” on Alcatraz Island in San Francisco this weekend. Looking to his artwork as a vehicle to speak on freedom of expression and human rights, Weiwei brings his concepts to the notorious military fortification to further emphasize ideas of confinement.

Sprawled across seven installations — With Wind, Trace, Refraction, Stay Tuned, Illumination Blossom, Yours Truly — the exhibition continues Weiwei’s audacious foray in the art world. Attendees will get a chance to roam through the famed jailhouse while immersing themselves in Weiwei’s latest body of work.