Japan sure knows how to elevate its food to an unparalleled level of art, and today we’d like to introduce you to the works of another master Japanese craftsman of sweets. His life’s passion is creating exquisitely detailed animal-shaped candy, which are so astoundingly intricate that it probably won’t be long before a museum asks to put them on display!

Shinri Tezuka is the artist behind these incredible edible creations. Born in 1989 in Chiba Prefecture, Tezuka states that he loved to sculpt anything he could get his hands on from a very young age. That childhood passion translated into a full-time career for him, and he now spends his days traveling across Japan to participate in all sorts of events and parties, and also offers hands-on workshops to teach people of all ages about his craft. As a result of these expeditions, he’s been featured on numerous Japanese television shows to date. And get this–despite being only 25, he’s already taken on three apprentices who are eager to carry on his tradition!

▼ Shinri Tezuka, the man behind the craft

Since 2013, Tezuka has also overseen his own shop called Asakusa Amezaiku Ameshin (amezaiku refers to the art of making candy into human and animal-shaped forms). The shop is fittingly located in Tokyo’s traditional Asakusa district, only a short walk away from the popular tourist destination of Senso-ji Temple.

▼ Exterior and interior views of the shop

While browsing through some of his breathtaking creations, it’s easy to forget that they are indeed candy and are meant to be eaten. In fact, some people find the distinction between the art and food so fine that one of the questions in the Q&A section of Asakusa Amezaiku Ameshin’s official site asks, “Can I really eat this candy?”

The answer is a resounding “yes,” by the way. In addition, Tezuka uses only naturally occurring dyes to color his creations, so you can rest easy knowing that you’re not eating any artificial pigments.

Let’s take a look at some of his animal-shaped candy creations now:

▼ The caption says that these goldfish are the two most popular designs among shop customers. 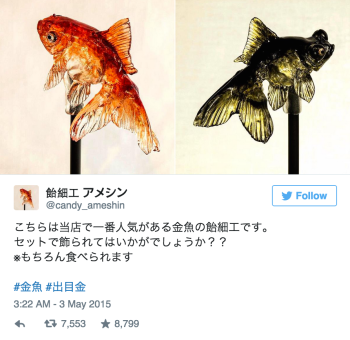 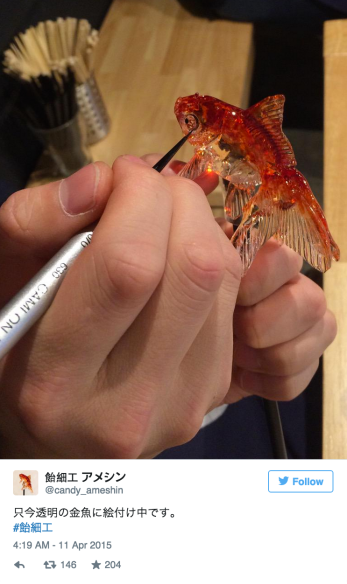 ▼ These gorgeous cranes were crafted using real gold leaf on their wings.

▼ Here are some candy creations crafted in Tezuka’s Asakusa studio…

▼ …and here are some he created at various public demonstrations.

Tezuka does take orders for customized candy creations at his shop, but he is unable to accept requests for popular characters due to copyright laws. Guess we’ll just have to wait and hope for a deal to come through with Nintendo so that we can see Tezuka’s version of Pikachu in candy form!

Meet the Ili pika (Ochotona iliensis), an endangered species that until last year, had not been seen in 20 years.

Discovered in 1983 and formally described three years later, the species had to wait another 10 years to be properly studied in its cliff-face homeland atop China’s Tian Shan Mountains in the northwest province of Xinjiang. In its 32 years on the record, just 29 individuals have been spotted, and it’s thought that the 2,000 or so adults estimated to exist back in the early 1990s has dwindled to less than half this, due to habitat loss and severely fragmented populations. A survey carried out between 2002 and 2003 turned up zero Ili pikas in 57 percent of the locations they’d been known to inhabit 20 years previously.

Needless to say, these little guys are in some serious trouble.

The image above was taken by Weidong Li from the Xinjiang Institute for Ecology and Geography, who had originally discovered the species. With a team of volunteers, Li had been scouring the mountains for signs of Ili pikas in early 2014, and as they were setting up their camera traps, they had an encounter with the curious fellow in the image above. “They found it hiding behind a rock, and they realised they had found the pika,” one of the team, Tatsuya Shin, told Carrie Arnold at National Geographic. “They were very excited.”

The Ili pika is one of the largest of the pika species, growing up to 250 grams and 20 centimetres long. Like other pika species, it’s evolved to live in cold climates, and makes its dens and burrows in the small crevices that cut into rocky mountainsides and cliff-faces. Pikas are known for the adorable peeps they make when they’re trying to communicate to each other, but for whatever reason, the Ili pika doesn’t seem to vocalise. (Although scientists have only seen 29 of them, so maybe they were just the quiet ones.)

Su Ami, a family run business from Vietnam, creates beautiful and cute crocheted animals, some of which measure only 1/4 of an inch! The little manufacture consists of 5 crocheters and is named after the nick name of the youngest member of the family, whose love for movie characters and various animals gave the idea for the business.

The tiny creations are incredibly detailed, with whales actually spitting water out of their backs and macro-sized penguins wearing differently colored scarves. 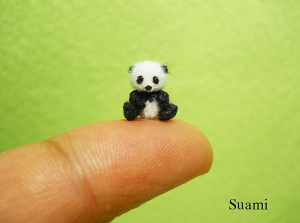 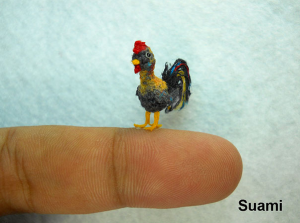 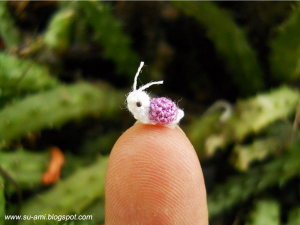 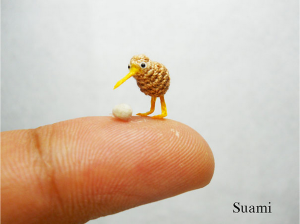 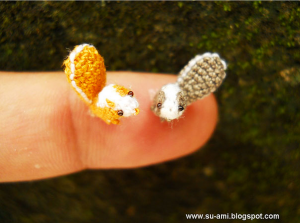