If no one told you, then you’d probably never guess that this intricate sculpture was carved from the pit of an olive. Chinese artist Ch’en Tsu-chang crafted it in 1737, and this miniature artwork stands at only 16 millimeters tall and 34 millimeters wide. It follows the shape of the pit and depicts a small boat with eight figures, each of which has its own expression and action. There are masterfully-carved details on the doors and inside of the vessel that are unexpected from a work this size, and it’s awe-inspiring to see just how well Tsu-chang had honed his craft.

According to the National Palace Museum of China, Tsu-chang’s handiwork is based on the poet Su Shih’s Latter Ode on the Red Cliff. It describes how the author enjoyed a boat ride with his friends under the moonlight sky. The artist paid homage to this inspirational source by engraving the poem on the bottom of the boat.

This amazing addition was no small feat- the poem is more than 300 characters long and occupies nearly all of its tiny underside.

This hairy alphabet by Shurong Diao is inspired by Chinese calligraphy. Shurong Diao wanted to build a connection between Chinese characters and Roman letters.

She states: “By using the distinct feature of Chinese women: their long black hair, I created this typeface to uniquely imitate the effect of painting English alphabet with ‘ink’ on rice paper.”

All images © Shurong Diao | Via: designboom

You Si, a Beijing artist, explores new possibilities of ink painting by using eyedroppers to deploy colors and ink onto a flat surface, a kind of Eastern Jackson Pollock. Chinese Art has a long history of ink painting, yet You Si is reinventing this centuries-old tradition by shifting his tools and technique. His works are bursting with dynamic forms, suggestive of flowers petals, cells, amoebas, jungles or supernovas.

Titles include “The Passage Between Space and Time,” “Evolving Garden” and “Wave in Outer Space,” evoking a kind of psychedelic otherworld. He describes his paintings simply as “mental universes.” 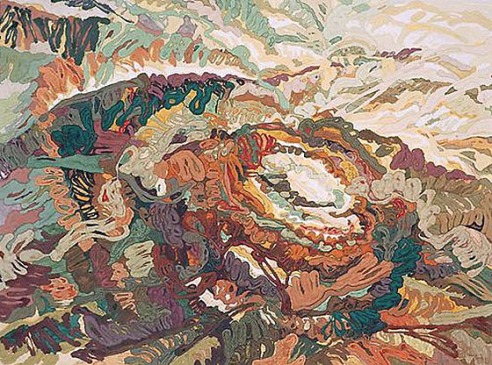 Ever since Chinese contemporary art became the darling of the international market, hundreds of studios, galleries and private art museums have been opening in the country’s major cities: between 2010 and 2011, one museum reportedly opened every day in China.

The V&A’s current blockbuster exhibition, Masterpieces Of Chinese Painting: 700 to 1900, explains the history and tradition of Chinese art but where do you start if you want to experience Chinese modern art and design on the ground?

The 798 art district, in the eastern suburbs of Beijing, is your first port of call. The former ‘model factory’ zone was built in the 1950s by east Germans – you can get a bird’s-eye view of the Bauhaus architecture from the new high line metal walkway.

Artists began moving in during the 1990s and it’s now a thriving area, with nearly 50 galleries and art shops. The Ullens Center for Contemporary Art is one of the biggest spaces and the attached UCCA Store is a treasure trove of design pieces.

Away from the tourist throng, Caochangdi is the art district founded by Ai Weiwei. Quiet, minimalist and uncommercial, it offers a different perspective on Beijing’s contemporary art scene. Look for the Three Shadows Photography Art Centre, White Space and Galerie Urs Meile.

The Chinese are just cottoning on to vintage: upcycling shop Brand Nu and the two Lost And Found outlets – where copies of government-issue 1960s chairs cost a cool £460 – are the height of hipster chic.

The Arrow Factory transforms a hutong alley storefront with site-specific installations. And even though Nanluoguxiang, the street that started the area’s boutique boom, is now a mass of crowds, loud music and food stands, it’s still worth visiting the famous Plastered 8 T-shirt shop.

Shanghai’s equivalent to 798 is M50, an old industrial area that now houses more than 120 galleries and studios. Highlights include the highly influential ShanghART and the OV Gallery.

Back in the centre, small galleries and boutiques dot the lanes around the Bund and the French Concession but confusing addresses can make them tricky to find.

At the other end of the scale, Shanghai’s new money and mega-city status has produced K11, the world’s first art shopping mall. The 61-floor centre opened in May and luxury shops sit alongside dedicated art spaces exhibiting pieces in the permanent K11 Kollection, including work by the likes of Damien Hirst and Yinka Shonibare, as well as up-and-coming local names.

RAM (the Rockbund Art Museum), a restored art deco building that’s part of a new development in central Huangpu, is a gallery space shows everything from established Chinese names such as Xu Bing and Yang Jiechang to Louise Bourgeois and Jenny Holzer, as well as hosting film screenings, talks and experimental music.

The Power Station Of Art is the new home of the Shanghai Biennial, while Pudong’s Long Museum shows the massive private collection of billionaire couple Liu Yiqian and Wang Wei.

Beijing’s art scene may be more organised but the hectic pulse of Shanghai is invigorating.

Travel to China for the modern art revolution 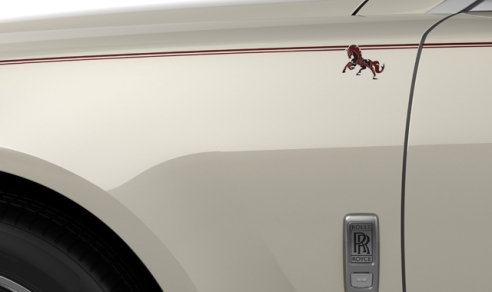 Celebrating the Year of Horse in the Chinese Zodiac in 2014, Rolls-Royce has announced the debut of the Majestic Horse Collection – a limited production of Rolls-Royce Ghosts that fuses the interpretations of the horse in traditional Chinese art.

Horses are often the subject in Chinese ink paintings, like Xu Beihong’s “Standing Horse in Autumn Wind,” and are traditionally depicted as a highly intelligent and loyal animal. To convey such imagery, the Rolls-Royce bespoke team has designed a warhorse-inspired motif for the bespoke collection, in the form of hand-crafted marquetry to the glovebox and dashboard, as well as embroidery to the headrest and cushions.

The exterior of the sedan is also finished with the auspicious horse motif, hand-applied to the twin coachlines.

The price of the car has not been released, but the British carmaker announced that delivery of the limited Majestic Horse Edition Ghost is expected to start in the second quarter of 2014. 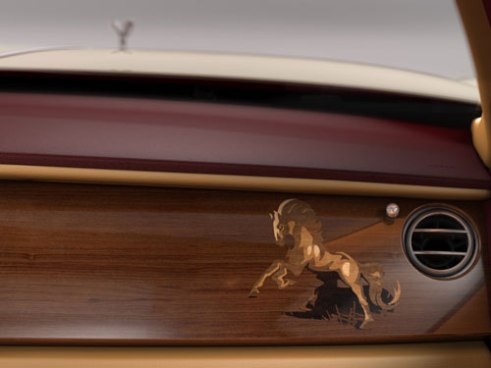 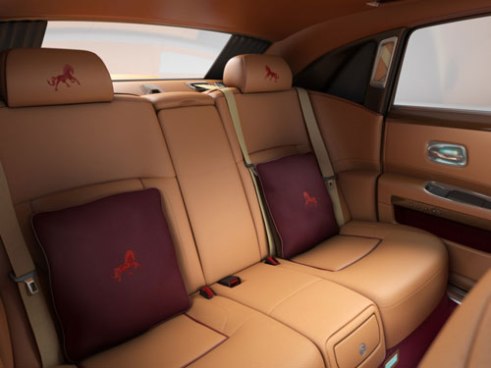