Finally, the great taste of a fried pork cutlet drenched in thick curry that you can slip in your coat pocket without getting wet!

Sold by Japan’s Tombow Beverage Co., this cola is based on the Ishikawa Prefecture specialty dish Kanazawa Curry which is a large fried pork cutlet (tonkatsu) soaking in a rich curry roux and topped with a drizzling of tangy tonkatsu sauce and served with a side of shredded cabbage.

This isn’t the first time a curry beverage has been released in Japan, but Kanazawa Curry Cola may be the first to take a carbonated cola base and blend in the tastes of curry roux and tonkatsu sauce.

Whether or not that’s a winning combination will be knowledge bestowed on the lucky few who can acquire one of the 100,000 bottles Tombow is planning to bottle and sell this year.

You would be most likely to find one at the various service stations along highways in Ishikawa and Toyama prefectures as a part of the Hokuriku Regional Drink Series. However, Tombow said they will distribute around the country and if demand is great enough they’ll also consider ramping up production in response.

If you don’t feel like going on a wild curry cola hunt, you can always go to the Tombow website linked below to purchase a 20-pack for 3,900 yen (US$35). That’s not a terrible price considering, at the very least, Kanazawa Curry Cola sounds like it could be a highly effective laxative. 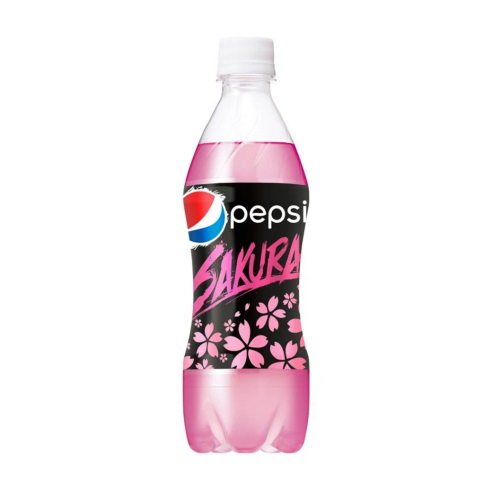 Pepsi is set to release a new “Sakura” (Japanese word for Cherry Blossom) flavor in Japan at the start of next month. This limited edition offering will hit the market just in time for “Hanami,” which refers to the traditional custom of cherry blossom viewing around the country.

According to NicoNico News the drink has a light pink color and smells of “sweet sakura.”

Garlic flavored cola. Just let that sink in for a moment. Fizzy sweet cola with a pungent garlic taste. Yum? Over the years, we’ve seen a lot of weird food and drink come out of Japan, and as of January 9, there has been a new addition to that list.

The town got its charming nickname from the fact that every July, so much garlic is harvested that the entire town, home to almost 6,000 people, smells of the pungent bulb. We have a feeling they don’t suffer from vampire attacks very often.

The town offers pretty much any form of garlic you could ever imagine, but the creation of the Takkola (get it? Takko + cola = takkola), took some trial and error experimentation. The real issue, apparently, was breaking through the stereotype that garlic should be used exclusively for food.

▼ Don’t you just want to plop a bulb of garlic in your next cup of Coke?

The drink is just cola mixed with some finely ground garlic, pretty simple. It’s just as bubbly and tasty as normal cola, but you get the pleasant aftertaste of garlic. Who wouldn’t love that?! Really, if you think about it, it’s probably not much different than washing down some garlicky gyoza with cola and then burping. You just don’t have to eat the gyoza first.

Since the name of the drink doesn’t mention garlic at all, this could easily be used to play some tricks on unassuming friends who don’t know that Takko is the garlic center of Japan. Then there is also the fact that “Jats!” is local dialect for what you say when you are surprised, an odd feature for the name of a cola. That is, unless the creators of this drink had some tomfoolery in mind when they made it!

▼ The garlic clove on the label could go unnoticed to the unobservant.

In reality, they chose the name because they want this item to leave a lasting impression and to “stimulate the heart” of whoever sips it. They advise that before you drink, turn it slowly to remix the garlic, open the cap carefully and then take a sip. According to the creators, there is no way that you won’t shout in surprise after tasting it.

So, if you’re itching to play tricks on friends, are just really scared of vampires, or are looking for a health-boosting cola, you can order a case of 24 bottles from the town’s merchandise website, for 7,200 yen (US$60) or if you’re in the area, head to the store itself where you can get single bottles for 299 yen (US$2.50) each, until the end of February. Also, please, if you do use it to play tricks on your friends, sneak a video and share it with us!

With the rainy season over and done, we’ve been seeing day after day of scorching sunshine here in the Tokyo area. If you’re spending much time outdoors, whether sightseeing or just commuting to and from work or school, it’s important to drink plenty of fluids, since it’s the best way to ward off dehydration.

Thankfully, Japan is covered in vending machines, so you’re never too far away from a cold, refreshing beverage. Of course, you can only knock back so many bottles of Coca-Cola before getting bored with the flavor, so we’ve scoured the streets of Tokyo and came back with no fewer than 10 vending machine drinks that fly under the radar in Japan.

The going rate for a canned or bottled soft drink in a Japanese convenience store or vending machine is about 150 yen (US $1.49). By shunning major brands like Pocari Sweat, Calpis Water, and the less comical-sounding C.C. Lemon and Aquarius, the most we spent for any of our liquid refreshments was 100 yen, and a few real bargains were priced at just 80 yen.

Still, some would argue that even where soft drinks are concerned, you get what you pay for. Would our selection join the esteemed ranks of satisfying drinkable oddities that alcoholic tomato juice recently ascended to, or would they be relegated to the depths occupied by mint chocolate beer?

First up was a can of Cola Shock, produced by JT, also known as Japan Tobacco, which actually sells a pretty wide assortment of beverages. Not to fear, Cola Shock isn’t a nicotine-laced concoction. As a matter of fact, there’s nothing particularly shocking about it, as it’s just an ordinary carbonated drink with a caramel aftertaste, making it an economic alternative to Coke or Pepsi. We were a little disappointed that it’s not a zero-calorie drink, though, since we, like a lot of people in Japan, have become big fans of calorie-free colas.

If you’re not a long-time soft drink connoisseur, you might not be familiar with the slightly fizzy, yogurty Skal. It’s been around since 1972, though, and apparently tastes much the same now as it did then, if the can’s proclamation that this is “The Original Mix” is anything to go by. Consider this a budget version Calpis Soda, with enough flavor that it makes for a little treat in and of itself.

Also known as Blizzard L, this vitamin-infused carbonated beverage bills itself as “A storm of C!” It also has vitamins B1, B2, B6, and B12. The sour notes are pretty strong here, and there’s a slightly spicy aftertaste, and overall it tastes pretty good, plus far better than the medicine-like flavor we’d incorrectly expected.

You know an energy drink is serious when it’s not max charge, but MAX charge! Extremely fizzy and with a chemically aftertaste, this isn’t designed for sipping during a moment of quiet contemplation, but it might be just the thing if you’re looking for a drink with a kick.

We’ve got no clue what the name is supposed to mean. Maybe this is a follow-up to some earlier Sangaria product we don’t know about called Preonic Water? In any case, this is a sports drink, and conforms to Japan’s standards for such by having a mild grapefruit-like flavor that’s somewhere between Pocari Sweat and the milder Aquarius in intensity. In keeping with its target market of active and fit individuals, a 500-mililiter (16.0-ounce) bottle has just 60 calories.

This is almost identical to the paper cartons of strawberry milk that’re a mainstay of Japanese convenience store shelves. Sweet but not as milky as the name implies, it sadly doesn’t quite deliver on the can’s promise of having a “delicate scent,” as we didn’t notice much of any aroma when we cracked ours open. Still, this makes a good choice for kids or people in the mood for something sweet.

On the other hand, Zeitaku Melon Milk is 50 percent milk. Instead of the sugary sweetness of melon soda, the flavor is more in line with Japanese melons, making this one of our test group’s more sophisticated members.

Although it’s only one percent actual fruit juice, this beverage also contains tiny little pieces of nashi, or Asian pear. We’re not sure we really needed all that pulp, but this was fruity and pleasant all the same.

We’d never tried Hiyashi Ame before, but we hear it’s actually a pretty common drink in Japan’s central Kansai region. Similar in taste to ameyu, a sweet and malty traditional beverage, Hiyashi Ame is flavored with cinnamon and ginger, giving it an old school flavor that makes this just a little like a Japanese version of sarsaparilla.

The most mysterious of our group came in this plastic bottle. Try as we might, we couldn’t find the name of the manufacturer written anywhere, and the best we could do was identify the country of production as Malaysia. This veil of secrecy didn’t hurt the flavor any, though, which was refreshing and sweet, with a generous amount of coconut water jelly floating about.

Honestly, despite their lack of cachet or star power, nothing in our group tasted bad, and we could honestly see some people becoming big fans and regular drinkers of some of them. So if you’re looking to keep yourself hydrated and refreshed, and do it all while spending about 30 percent less than usual, we highly recommend stepping off the beaten beverage path.

FritoLay has unveiled a new snack recently in convenience stores in Japan… Pepsi-flavored Cheetos… Yes, you heard us.

Branded as Shuwa Shuwa Cola Chips (most likely an onomatopoeic description of the fizziness as the chips hit your mouth, as the Japanese language uses onomatopoeia in daily language more than one would expect) is, according to the promotional copy, “a snack that allows you to enjoy the fizziness of a carbonated drink via the pairing of long-seller Cheetos and Pepsi Cola seasoning.”

Reports have described the product as bearing a noticeable “flat cola” aroma, mixed with the familiar smell of cinnamon donuts. The Cheetos, which carry a distinct fizz with “definite popping and crackling,” are coated with a cola powder with an strong citrus taste that unfortunately overpowers the sweet cola flavor.