Sailor Moon holds a unique place in the anime fandom as a common entry point for many 90s kids and introducing queer characters to children’s television.

Fan communities filled in the gaps for censored American version. Fans attracted to a show focusing on strong female friendship, romance, and super powers could turn to the internet and find what was missing, including the truth about the show’s characters.

In the latest episode of Vice’s American Obsession mini-documentary series, viewers can learn about some of the influence Sailor Moon had on LGBTQ+ kids growing up in the 90s. The documentary interviews cosplayers at last year’s Anime Expo, Viz Media‘s Charlene Igram, and other fans of the anime series.

Japan is looking for a few good shinobi.

If you’re feeling sad because you weren’t chosen as one of the two samurai being recruited  in Aichi Prefecture this month, cheer up! It turns out there’s now another opportunity to become a professional sword-wielding warrior, as Aichi’s tourism board is now looking to employ six new ninja.

Similar to Aichi’s samurai-themed Nagoya Hospitality Generals Brigade, the Hattori Hanzo Ninja Squad, which also operates under the name Hattori Hanzo and the Ninjas, is a Nagoya-based group that makes live appearances to promote tourism to the Aichi area and Japan in general to both domestic and overseas travelers. As a ninja, your work tasks will include putting on awesome martial arts stage shows and instructing kids in proper shuriken throwing technique.

At 180,000 yen a month, the Hattori Hanzo Ninja Squad starting salary is identical to that of the Nagoya Hospitality Generals Brigade. The Ninja Squad also looks to be an equal opportunity employer. Not only does the group include kunoichi (female ninja)…

…the applications seem to be open to non-Japanese would-be ninja as well, as evidenced by the fact that the Ninja Squad has made its recruitment information available in English as well.

A high degree of athleticism and acrobatic talent are of course prerequisites for the job, as are these seemingly contradictory, yet in this case totally justified, personality traits:

If you meet all those criteria, and you think you’d look good in black, applications can be found here, and will be accepted until March 22.

Cats are continuing on their quest to rule the world, and this time they aim to stop traffic with their cuteness.

This stunning collection of headgear, called Neko Helmets, or “Cat Helmets”, comes in 12 different designs, all featuring an adorable set of cat ears and a variety of color combinations.

The helmets have been created by a Russian company called Nitrinos motostudio, who first unleashed their feline designs at a festival of Japanese culture in 2011. Since then, they’ve developed four custom-made styles which range from basic colour types through to more bold, printed varieties.

▼ Single-colour helmets, featuring either a gloss or matte finish, retail for US$495

▼ Dual colour styles add a second colour and lines on the helmet according to individual specifications for $550.

The tri-colour model ($590) incorporates any three colours of your choosing, which makes it a perfect way to match your helmet with your outfit.

While the designs look amazing, they also have comfort in mind by providing double ventilation and a removable 100% polyester lining. In case of an accident, the fibreglass ears detach without any structural damage to the body of the helmet, and the shape won’t generate any additional resistance at speeds of up to 100 kilometres (62 miles) per hour.

For the full traffic-stopping effect, the company offers a special “aerography” design, which creates complex patterns on the body of the helmet and the visor if requested.

These designs take a little longer to perfect, but with this service they’re able to create your own personal design from any picture or photograph you provide. Which means you’ll be able to protect your head while looking like your own cat or even an anime character like Hello Kitty!

All helmets are made to order within three weeks, with worldwide delivery provided via EMS delivery service.

To check out their full range, visit their website here for more details. 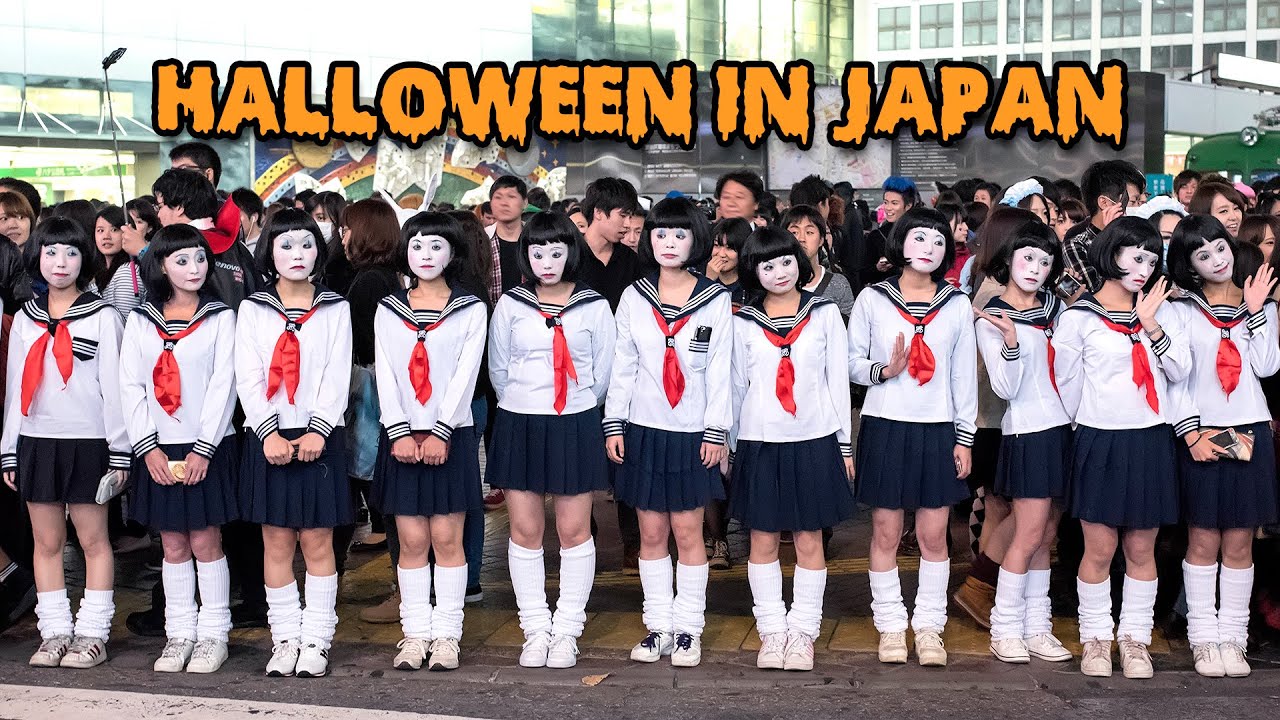 The Tokyo Metropolitan Police Department mobilized hundreds of riot police for the event this year.

Last year, two people were arrested. One was detained for punching a police officer while the other was taken into custody for molesting a woman. Earlier in the day, singer Kyary Pamyu Pamyu called on partygoers in the capital to keep the streets clean as a large quantity of litter was expected to result from the gathering.

“I want everyone to help keep the streets clean, using these bags (provided by the city),” the singer said in front of Tokyo Tower in Minato Ward.

The event was organized by the Tokyo Metropolitan Government to raise awareness by handing out orange jack-o’-lantern-themed garbage bags.

“When you have fun, there will be lots of garbage,” the singer said. “I want to see people in the streets fill the bags in a kawaii (cute) way.”

The event formed part of a campaign dubbed “Halloween & Tokyo,” under the slogan of “cleanest Halloween in the world.”

The bags were handed out near stations and large road crossings in busy districts such as Shibuya, Shinjuku and Roppongi.

During last year’s boisterous Halloween celebrations, a large quantity of litter, such as drink cans, were thrown on the ground by revelers, prompting the metropolitan government to launch this year’s campaign.

Halloween in Japan keeps getting bigger and better every year, with cosplayers coming out in droves to celebrate the world of costumes and make-believe. This time around, Japanese car manufacturer Nissan is joining the fun with a fleet of taxis dressed up in Halloween costumes, complete with “monster drivers” behind the wheel.

The monsters and their vehicles will be helping fellow ogres and ghouls by offering free rides to people in costume in the Shibuya area on October 29 and 31. What’s more, the unusual vans promise to be so spacious, they’ll accommodate any type of outfit you’re wearing!

The event, called “Ride on Halloween by Nissan”, will feature three “costumed” vehicles: an orange Jack-o-Lantern, a purple-and-green Frankenstein (‘Frankenstein’s Monster’ for the purists), and a pale-brown, bandaged Mummy.

▼ They may be monsters, but they’re Japanese taxi-driving monsters, so they’ll all be wearing white gloves.

The promotion is designed to showcase the spacious nature of Nissan’s NV200 taxi, which has been ferrying people around New York and London for several years and will finally be making its debut in Japan as part of the preparations for the 2020 Tokyo Olympics.

▼ New York marked the debut of the NV200 taxi with a #HAILYES interactive marketing campaign in 2013.

In Japan, they’re using Halloween to highlight the roomy interior of the new taxis, by offering the free rides to cosplayers to show how a van ride can be superior to a sedan ride, especially when you and your clothes take up a extra space. The driver of each vehicle will also take part in the dress-up!

You can catch a ride at three as-yet-unannounced designated pick-up and drop-off points in the Shibuya area, which is one of the main hubs for Halloween celebrations every year.

The taxis will run between 6:00 p.m. and 11:00 p.m. on 29 and 31 October. The organisers have pointed out that free rides are limited only to those in costume and rides cannot be guaranteed, so if you really want to step inside the cosplaying vehicles, you might want to try your luck before the night of Halloween, when there’s less chance of monsters lurking about.

The pick-up and drop-off points will be announced soon, so be sure to check out the official campaign website for updates!

Check out these 20 cosplayers at New York Comic Con 2015:

4. The Witcher’s Geralt and Ciri

The convention draws fans from around the country to take part in sci-fi and fantasy costume contests, a massive parade through downtown Atlanta and educational seminars about science and costumes making.

One of the more popular events at the convention this year was a private party held at the Georgia Aquarium, home to the largest aquarium in the Western Hemisphere. Costumed revelers danced and drank under the glow of passing Beluga whales and sharks on display, and dance-heavy music thumped in the background.

Tens of thousands attend the annual event, which began Thursday and continued through the weekend.

A Taiwanese fast food restaurant employee dubbed the “McDonald’s goddess” has drawn the attention of web users around the world.

The doll-like Wei Han Xu, also known as Weiwei, has been employed part-time at McDonald’s for five years. A blogger by the name of RainDog recently uploaded pictures of the attractive McDonald’s employee wearing a pink uniform, a handkerchief and high heels, calling her the “cutest McDonald’s goddess in Taiwanese history.”

While Wei still enjoys her job taking orders and calling out numbers, she also likes being in front of the camera, as she consistently keeps her Facebook page and Instagram up to date with selfies.

Thousands of comic book fans, gamers and cosplayers are thronging the 17th Ani-Com & Games Fair in Hong Kong. Organisers are hoping to beat last year’s attendance of more than 720,000 people.

About 100 die-hard comic book fans and gamers camped out overnight ahead of the fair. Previous years saw larger crowds wanting to score limited edition merchandise, which organizers have since banned.

At the head of the queue was a fan eagerly awaiting a deluxe edition of his favourite videogame. “I’m here for the Playstation’s latest Metal Gear Solid video game. This year, I’ve set aside about US$1,000 to spend,” said Mr Chan.

There are also many comic characters coming to life. Cosplayer Paul Ho said: “We’re the crazy, crazy people. We take annual leave and come to the Comicon Hong Kong to support society, support the positives. I always say, you have heart, you can be the superhero.”

Mr Ho, an event organiser, paraded around the fair with friends in home-made costumes, inspired by the Avengers movie.

The dark side of the force was also strong when its most famous Sith Lord made an appearance. One would also likely need a second garage to fit a 1/6 scale of the Millennium Falcon spacecraft, which needs no introduction to Star Wars fans.

A Millennium Falcon movdel from the Star Wars is displayed at the 17th Ani-Com and Games exhibition in Hong Kong.

“We built it because we’re die-hard fans of Star Wars, we want people to love Star Wars, and that’s why we built it, but it’s not for sale,” said Chere Li, marketing manager at Hot Toys.

What is for sale and is its bestseller is the Iron Man Hulkbuster action figure that was featured on the big screen recently.

Channel NewsAsia‘s Hong Kong Bureau Chief Roland Lim also had the chance to test a product that is not out in the market yet. Sony‘s virtual reality headset, codenamed Project Morpheus, will not be ready until next year and Sony is planning for 30 games to come with it.

Hong Kong is the first in Asia for gamers to play Star Wars Battlefront, while Microsoft has set up a special wall with 200 car models to celebrate the 10th anniversary of racing game Forza.

The convention runs until Tuesday.