The worst area to contract germs is when you’re stuck in an airplane cabin, breathing air that is essentially being recycled by you and the other passengers. Bacteria found in the common cold, e.coli and listeria have all been found in airplanes.

Thankfully, this may soon change! Vancouver high school student, Raymond Wang, recently shared his invention at the Intel Science and Engineering Fair. According to MNN.com, Wang’s invention would improve and produce fresh air flow by nearly 200% and decrease airborne germs by 55% in an airplane cabin. His inspiration for research came from the scary Ebola outbreak from last fall as well as the shocking statistic he found from the Centers of Disease Control and Prevention:

“If a passenger has a disease such as H1N1 and walks into a plane’s cabin, he has the potential to spread the disease to as many as 17 other passengers on the flight.”

A project that would help promote clean air sounds like quite expensive, but it’s not! Wang’s prototype only cost him $10 to create and he estimates that it would cost $1, 000 to update an entire plane and it can be installed quickly. The airplane will be able to produce a clean airflow the very next day.

Wang has already applied for a patent on his currently unnamed invention. Fingers crossed, we will soon be breathing comfortably while traveling! In the mean time, we should all be extra careful and courteous about washing our hands and staying clean.

Macaron Day (Jour du Macaron) is a charity that has been going on for nine years in France. It initially began on a small scale as Pierre Hermé’s personal project at his shop, but has since grown into a large annual charity event supported by various organizations and individuals, including many members of the Relais Dessert, an international association of top confectioners from around the world.

In France, the event is held each year in late March and the proceeds from selling the charity macarons go to the organization “Vaincre la Mucoviscidose (Conquer CF)” to support the fight against Cystic Fibrosis. The event has also spread to Japan, where it is now held on the day of the summer solstice, which this year falls on June 21. Here in Japan, the charity proceeds are donated to the “National Network to Support Children with Serious Illnesses”.

As the name suggests, the charity features the delectable macarons created by master pastry chef Pierre Hermé, but it’s also about raising money for children fighting serious diseases. And this year, our beloved Hello Kitty will be pitching in to help with the project — by becoming the PR ambassador for Macaron Day in Japan! Now, we know we’ve often described Hello Kitty as a hardcore entrepreneur who isn’t at all picky about the jobs she takes on, but this time, she’s all about seriously contributing to a good cause. But what kind of event is this Macaron Day, and how exactly did Hello Kitty become involved in it? 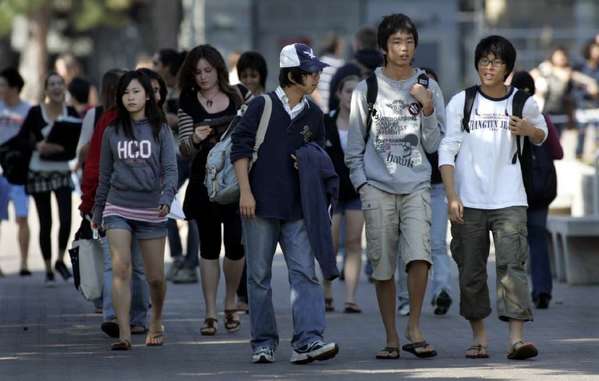 Which Americans are least likely to be overweight or obese? Asian Americans, by a long shot.

New data from the Centers for Disease Control and Prevention reveal that 38.6% of Asian American adults have a body mass index over 25, the threshold for being considered overweight. That’s far below the 66.7% rate among whites, 76.7% rate among blacks and 78.8% rate among Latinos.

Some Asian American adults are more likely to be overweight than others. For instance, 43% of men have a BMI over 25, compared with 34.7% of women. In addition, the prevalence of overweight adults is nearly 1.5 times higher among adults who are at least 40 years old than it is among those between the ages of 20 and 39, the data show.

The figures are based on physical measurements of Asian American volunteers who participated in the CDC’s National Health and Nutrition Examination Survey in 2011 and 2012. During those years, researchers recruited extra Asian Americans for the long-running study in order to bolster the “scarcity of health information” about this minority group, according to the new report, released Wednesday.

The researchers, from the CDC’s National Center for Health Statistics, also report that 10.3% of Asian Americans have high total cholesterol, with at least 240 milligrams per deciliter of blood. That is “similar” to other American adults, according to the study.

The 14.3% who have low levels of HDL cholesterol (the “good” kind) is lower than the 21.8% prevalence among people the CDC classified as Hispanic.

In addition, the researchers say that 25.6% of Asian American adults qualify as having hypertension because their blood pressure is at least 140/90 millimeters mercury or because they are taking blood pressure medications. That’s about the same as the prevalence for whites and Latinos, but lower than the 42.1% incidence among non-Hispanic African Americans.

Nearly 1 in 20 Americans is an Asian American — a person of Chinese, Asian Indian, Korean, Philippine, Vietnamese or Japanese descent —  according to the CDC. That amounts to 15.4 million people, a figure that has climbed by more than 40% since 2000.

The report also notes that 72.1% of Asian Americans attended school beyond high school and that 84.5% were born in another country.