Weighing in at about 100kg with retractable propellor arms and a streamlined body, the “Fighting Gazelle” is the answer to Chinese Sci-fi fans’ dreams. The flying car was unveiled last week at the 5-day China Helicopter Exposition in Tianjin, which this year showcased 50 new helicopters.

The Aviation Industry Corporation of China (AVIC) is developing the car to deal with rough terrain, and especially stretches of road with obstructions. Hong Xiao, the head of the helicopter office in the AVIC, told CCTV: “While you are driving to where the road is broken, or facing a gully, you can press a button to lift the car. It will then fly over the obstacles and reach the other side of the road.” He added that the propellor arms retract to return the vehicle into car-mode.

The current 100kg model isn’t a vehicle for transporting people, the makers are still working on a heavier version capable of doing so. Like a drone, it has passed unmanned flight tests and future models are intended for military usage. They may even go into commercial production.

Hong says, “Our next plan is to make one weighing around two to three tons in two years time.”

House of Japan:
A research team at Tohoku University has developed a robot capable of being sent aloft and surveying radiation levels inside the reactor building of the crippled Fukushima No. 1 nuclear power plant.
The propeller-driven device, unveiled March 12, will be carried on a rolling robot, which can move through debris-filled areas. Both can be dispatched into highly radioactive areas where plant workers cannot enter.

Designed for use inside the Fukushima plant reactor buildings, the flying robot, weighing 2.6 kilograms, can withstand deadly radiation levels as high as 10 sieverts per hour.

The crawler robot it sits atop weighs 75 kg. Rolling on belts looped over the wheels, the robot can crawl around debris and up stairs. It is controlled remotely using a 250-meter cable.

The project was commissioned by the Agency for Natural Resources and Energy at a cost of 180 million yen ($1.5 million).

A drone is an aerial vehicle which can fly around without a human pilot aboard. Instead, this aircraft is guided remotely. Now I don’t know about you, but nothing about remote airplanes scream “romantic” to me. Well, it seems Zhang Ziyi’s boyfriend Wang Feng intends to change that.

Zhang Ziyi, the Chinese actress most known for her roles in Crouching Tiger, Hidden Dragon (2000), House of Flying Daggers (2004) and Memoirs of a Geisha (2005), just celebrated her 36th birthday. Her boyfriend Wang Feng, a Chinese rock musician, decided that she needed much more than a rainbow cake to celebrate her birthday.

Pictures have made it onto the internet showing a small, white drone flying towards the couple. Wang Feng apparently reached into the basket hanging from the drone and pulled out a diamond ring before getting down on one knee and asking for Zhang Ziyi’s hand in marriage. 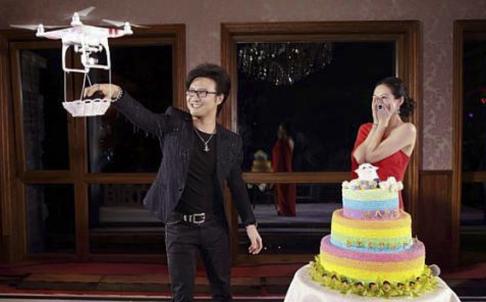 According to Chinese media, Wang made a promise to take care of Zhang even in old age. The two then embraced and kissed as fireworks lit the sky.

On Sunday, Zhang shared a picture of heart-shaped fireworks on her Sina Weibo microblog account along with the caption, “I do!”

Wang followed this up by posting a few words on his own microblog. “Thanks for giving me a perfect life — all hardships are already in the past,” he posted on Sunday. “From here on out, we’ll grow old hand-in-hand.”

Needless to say, fans are delighted with the extravagant proposal. Even after seeing our fair share of unique marriage proposals, a drone proposal is still a rare sight. So tell us. Is a ring-bearing drone cute or way too over the top?

Drone workers may be a reality not too far off, as Singapore got its first taste of robotic waiters this past weekend at Timbre @ Substation, a live music restaurant and bar. Developed by Singapore-based InfiniumRobotics, autonomous drones were used to deliver drinks and dishes. Flying back and forth from the kitchen to a drop-off area, the robots were created to take the brunt work out of having to haul dishes in and out.

The drones are also able to dodge any stationary objects, detect other drones, and even fly in formation if necessary. Human waiters aren’t out of a job for now, as the drones themselves do not deliver straight to tables, yet. Although not completely replacing humans, the role of the drones are aimed at allowing waiters more time to focus on customer service. Looking at a full launch by the end of the year, the drones are available to restaurants for a “low seven figure sum.”

Time will tell whether this will be the future for the F&B industry.

Because watching fireworks from the ground is so 2014… Check out Hong Kong’s dazzling New Year’s fireworks show from a drone.

Seriously, fireworks are so much cooler when you’re viewing them from the sky instead of from the ground.

http://vimeo.com/92909743 Now, chances are you’ve already seen many pictures and video footage from Japan, especially of tourist areas in cities like Tokyo, Osaka and Kyoto. But this video, shared about a month ago on Vimeo, offers a look at these cities from a very unique perspective — from up in the air! The video, filmed by a tourist visiting Japan, was taken from the perspective of a remote-controlled drone attached with a camera. And while some of the shots captured are of well-known tourist spots, Internet users both inside and outside of Japan seem to have been impressed by how the unique angle gives the familiar scenes quite a new feel! Let’s see what some of the popular sites of Japan look like from up above. Here’s the video taken by Gino Montalvo, who visited Japan earlier this year. According to his post, it was filmed using a drone, or remote-controlled aircraft called the DJI Phantom 2.

Photojojo founder Amit Gupta recently used the camera on an aerial drone to capture this dramatic video “selfie” of himself, Nick Bilton, and Zach Klein atop Bernal Hill in San Francisco.