Unless you’re an expert for aficionado, sushi can be scary. With so many options to choose from, it can be overwhelming trying to decide what kind of sushi to try first.

Take Lessons created a sushi cheat sheet that details all the popular rolls, ingredients and etiquettes. Customers can now have an idea of what’s appropriate or inappropriate when dining at an authentic sushi restaurant. They even threw popular sushi-centric vocabulary for those interested in immersing themselves.

Check out the graphic below:

Its name means foam. It’s made with three layers of cherry, pistachio, and chocolate ice cream. It’s also generally considered Italian, except at the BLVD Creamery at the Monte Carlo in Las Vegas, where, believe it or not, the spumoni ice cream is 100% Asian.

The first time we met Chrissy Teigen she was scarfing down chalupa stuffing at a Taco Bell Thanksgiving dinner (they exist). She’s one of the most charming, potty-mouthed people we’ve had the pleasure of meeting, well versed in both froufrou gourmet and fast food munchie talk. Foodbeast got the chance to catch up with her a few weeks ago, getting the word on her stint as a judge on Snack Off — think Iron Chef for Stoners — and the vilest thing she’s ever put in her mouth.

If Nancy Grace came over for dinner, what would you cook her?

That depends if she has any allergies, because I would cook all of those foods. Inside one fantastic pie.

My personal favorite thing that John makes is his fried chicken. I bought him a deep fryer for each house, for each coast, because  I needed him to make it whenever I need. He does an amazing mac n cheese. A little more intricate, three cheeses. It’s wonderful. People demand it every barbecue we have.

I’ve actually never had Five Guys before. I think maybe I did in the DC airport. I don’t recall it because I was probably a little hungover. I’ve had In-N-Out so many times. I absolutely love In-N-Out but those fries kill me. The In-N-Out burger over any other burger, but I will take McDonald’s fries.

Have you ever gone Monkey Style?

If you could run your own restaurant, what would you have on deck?

I don’t think I’d ever own a restaurant really. I think that anyone that thinks that they can do it are usually the wrong people.

I would love to open up a bed and breakfast. I would love to have a very small menu, with 3 apps, 5 main, and maybe 2 desserts and 1 special or something. I think all menus should be super limited, do they best you can with them, rather than those large menus. I would do my mom’s scalloped potato dish, a shepard’s pie or chicken pot pie. I love anything with a poached egg on it. So a salad with lardons, honey mustard vinegrette, with a poached egg. Tomato soup. I make the best tomato soup. Definitely a beautiful roasted chicken dish with seasonal vegetables. Fish and Chips with my dad’s famous tartar sauce.

As you can see this menu has no clear vision. It’s a very classy b&b.

Just throw on some truffle sauce and you’ll be fine… Do you watch Kitchen Nightmares?

I’ve seen every single episode. What I don’t understand is why don’t they clean up if they know he’s coming and why are those mistakes so fixable?

That being said: Guy Fieri or Gordon Ramsay?

I would rather hang out and have a good time with Guy. I might want to go to a fancy restaurant with Gordon. I actually did go to his restaurant [Fieri’s] in NYC. We went in with every intention of making fun of it and we walked away tail-between-our legs. The food was excellent and the decor was hysterical. You have to take it for what it is and enjoy it.

Most ridiculous thing you’ve judged on Snack Off?

The most vile I’ve put in my mouth on the show was a smoked salmon tartar olive baguette topped with a red maraschino cherry. It was horrific.

I’ve been eating sushi wrong for years. How do I get that nigiri in the soy sauce without everything falling to pieces?

Here is how to eat that Nigiri like a pro… 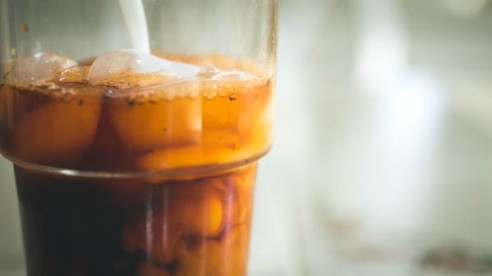 The Cha-Manau — a combination of strongly brewed Thai tea (without milk) and Thai lemonade, or in more western terms, a Thai Tea Arnold Palmer.   Domique Zamora of Foodbeast decided to play it a little different in our recreation, keeping the milk and trading out the traditional sweet  lemonade with a lychee and thai chili version.

How to Make It:

Check out this link:
How to make a Thai Tea Arnold Palmer… 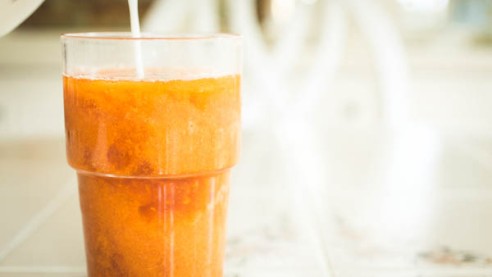