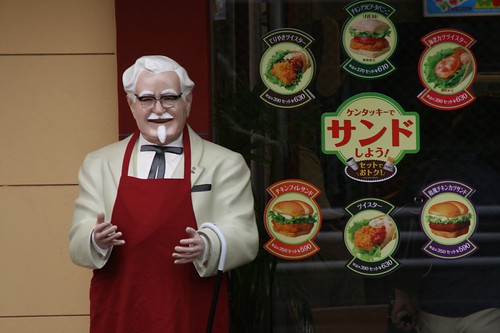 Apparently emboldened by the previous success of chicken nuggets coated in cheese powder, Mexicana has decided to go all out and add strawberry, banana, and melon to the available flavors for their fried chicken. However, according to online reaction, the result is not great.

According to the website Soompi reaction to Stoplight Chicken in Korea has been less than positive, with various criticisms appearing online. In particular, mukbang – which is both my new favorite word and online Korean shows in which people eat something and talk about it – have been harsh.

The video is fairly long so I’ll give you the gist: Throughout the 30 minutes that this video lasts she only eats about four and a half pieces (1 strawberry, 3 1/2 banana) and spends much of the time picking at it, trying to shake off the fruit flavored powder, and making a phone call.

Adding fruit to chicken doesn’t seem like such a far-out idea. Usually a touch of lemon, lime, orange or cranberry goes really well with such a dish. However, the unique choices of strawberry, banana, and melon are much harder to imagine.

KFC Hong Kong has rolled out a new menu item that has the internet salivating over their screens. Pizza chicken is a delicious concoction that uses marinara, mozzarella and cheddar cheese as its breading and sauce. The result is a crispy and flavorful concoction of two of fast food’s star players.

However, the only problem so far is that this item is a KFC Hong Kong special, but hopefully if you’re vocal enough, KFC will be nice enough to bring this Stateside where it will undoubtedly become a star of fast food innovation.

We can’t tell if the Pumpkin trend is ending or just getting started anymore. Kentucky Fried Chicken Japan has added a new Halloween-inspired biscuit to their menu and, guess what, it’s pumpkin-flavored. The biscuits are actually made with kabocha, a green squash that looks like a smaller version of a pumpkin though less bitter and a bit more moist.

The pumpkin biscuits can be purchased individually or as a part of the Halloween combo bucket KFC is offering. The bucket will come with two pumpkin biscuits, six pieces of chicken and two small fries. Japanese children can finish their chicken and even use the bucket as a candy container on All Hallows’ Eve.

Yeah, it’s over in China, but it still puts that thought in the back of your mind. Read a headline that says worms were found inside KFC wings, and try not to feel some type of way when you go to KFC.

A woman was halfway through eating her order of chicken wings, when she suddenly noticed her food was moving. Yup, little white worms inside the wings, almost blending with the chicken meat.

She complained to the store manager, and received a full refund and a coupon for a free combo meal. So she now has a chance to get worm-infested food, but for free.

Have fun chowing down that 10-piece bucket.

The brand is pushing their Twitter followers to tweet about the product using the hashtag #KFC, most likely to promote fried chicken awareness. They’ll then select one lucky individual to receive the keyboard, a fried chicken mouse and a fried chicken USB. Yep, as far as everyone knows only one exists.

While nothing more than a PR tactic, the keyboard and computer accessories are the pinnacle of fast-food novelty gifts. No word yet on whether or not this campaign will only be available to Japanese citizens. However, we are more than prepared to spam the Twitterverse until we get our hands on said fried chicken keyboard and accessories.

People in Japan love fried chicken. It’s so popular it’s become one of the staple ingredients in Japanese bento lunches, where it’s served in small, boneless pieces known as kara-age, and it’s in such high demand that you’ll find queues outside specialist kara-age joints around the country.

World-famous fast-food chain Kentucky Fried Chicken has finally picked up on the popularity of the chicken piece with a new line-up of Japanese-style hole-in-the-wall outlets dedicated to serving up kara-age in a variety of KFC flavours. And that’s not all. They’ll even serve it up in a bento lunchbox too.

Known as Niwatorikaratei 「鶏から亭」, there are only four of these specialty outlets in Japan – three in Tokyo and one in Yokohama. We visited the store in Togoshi Ginza, a place that gets its name, incidentally, from the fact that it was built with bricks left over from the reconstruction of Ginza after the Great Kanto Earthquake of 1923.

If you’re after something more substantial, then you can try the Japanese style bento lunch for 515 yen ($5.05), with your choice of three chicken pieces.

We decided to buy the bento box and as the store was promoting their new seasonal product, the crunchy pepper and roasted rice chicken, we knew we had to give this a try.

Offering a new culinary experience, the KFC bento box comes complete with a set of chopsticks.

The lunch box is two-tiered, with the main ingredients on top and a tray of rice underneath.

Alongside the chicken pieces we have a scoop of Japanese-style potato salad and a square of Japanese omelette. These were remarkably tasty and a great accompaniment between bites of chicken.

From left to right we have the Koshou Arare (Pepper and Roasted Rice), the Shouyu (Soy Sauce)  and the Karauma (Delicious Spicy). While the Soy Sauce chicken was delightfully salty and the Delicious Spicy could’ve done with a little more kick, our favourite was the Pepper and Roasted Rice, which had a fantastic crunchy texture, thanks to the crispy, puffed rice coating.

While the chicken pieces had a distinct KFC flavour, the Japanese influence and packaging made this a unique bento-eating experience! If you’re in town and you come across the Colonel on one of these Japanese-style banners, be sure to pop in and give it a try!

Man, doesn’t that pile of Kentucky Fried Chicken look enticing? Sure, it may not be the most sophisticated meal, and there’s really no way you can twist the nutritional facts to call it particularly healthy, but you’d be hard-pressed to find a purer, simpler gastronomic joy than a bucket of fried chicken.

But you know what makes the above image all the more beautiful? The large-font Japanese text smack dab in the middle of it, the part that says tabehodai, or, in English, “all you can eat.”

Taking a page from Burger King’s endless Whopper promotion, KFC Japan has announced that for two days this summer, you can have all the fried chicken you can eat for 45 minutes for a measly 1,280 yen (US$12.50). The popular chain is being so generous that the price also includes French fries, a soft drink, and free refills of both, as well.

The promotion is part of KFC’s celebration of the anniversary of the chain’s founding , and can be taken advantage of at all 537 branches in Japan on July 3 and 4. Every restaurant will be serving up KFC’s original recipe, and while the Kentadon rice bowl isn’t on offer as part of this deal, select locations are even being so magnanimous as to include the option of extra spicy red hot chicken.

There are a couple of catches, though. First, only a limited number of people can take advantage of this deal at each location. KFC Japan will start accepting reservations on June 14, presumably through its website here. The company also says that those branches which don’t fill up all their slots with advance signups may also accept hungry walk-ins on the days of the promotion on a first-come, first-served basis.

Diners won’t be able to choose which cut of chicken they’d like in each refill, because it’s logistically impossible for any restaurant group to obtain that many drumsticks. Finally, although KFC sells the majority of its chicken in Japan as takeout, you can’t take any portion of your all-you-can-eat chicken home with you. While this means you won’t be able to take home enough leftovers to feed your family for the week, each paying adult can also bring one child, aged 3 to 6, along with them, free of charge, for the all-you-can eat deal. Additional kids in the same age bracket can be tacked on for 600 yen each.

▼ We recommend having a nice, long talk with your five-year-old about the concept of “self-restraint” before you turn them loose on limitless fried food, however.