You might remember James Hahn as the guy who did a Gangnam dance on the 16th hole of the Waste Management Open in Phoenix in 2013 after birdying there.

Now you can know him for being a PGA champion.

“Humbling is awesome. Winning is awesome,” Hahn said. “Everyone wants me to do the dance. I don’t think they even know my name.”

They do now. James Hahn graduated in 2003 from UC Berkeley after playing his college golf there. The 33-year old has been on the professional tour for three years. He took home a $1.3 million prize. That’s quite different from what he used to do to earn some money.

You can read about that and the big event in his life coming up in about three weeks in Fox Sports. 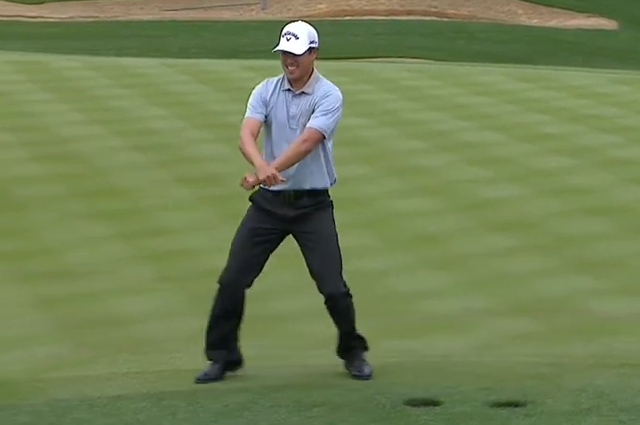 The Boston Globe recently shed light on the dreams that thousands of Korean youngsters have, which is to become the next big K-pop star — bringing the once regional trend to the forefront of popular culture. Led by Psy‘s rapid rise to stardom in 2012 with his Korean rap single “Gangnam Style,” which sent shockwaves around the world via a playful YouTube music video, K-pop is an ever-evolving entity with a vast amount of potential.

This photo series captures the arduous and gruelling task of gaining recognition in an industry that is saturated with pre-teens and teens striving to make a name for themselves. According to a recent survey, a staggering 21 percent of pre-teen respondents in Korea want to become K-pop stars — the most popular career choice in Korea by a large margin.

For more, head over to The Boston Globe and check out the full piece.

We all knew how popular PSY’s “Gangnam Style” was when the tune could be heard blaring out of television, smartphone screen, taxi radio and karaoke machine the world over, a phenomenon that was affirmed when it became the first YouTube video to ever garner one billion views. The song’s music video recently reached another absurd milestone, surpassing YouTube’s highest possible view count of 2,147,483,647 views as it is currently capable of storing on its 32-bit integer code. As a result, YouTube has had to upgrade to a 64-bit integer, which can accommodate up to nine quintillion views. F

or old time’s sake and to help the music video reach its new goal, watch it over here.

Make sure to also hover your cursor over the view counter for some animated math.

South Korean pop artist PSY, who’s “Gangnam Style” recently surpassed 2 billion views on YouTube, has released the official music video for his newest single “Hangover” featuring none other than Snoop Dogg. The video went live on Sunday night after PSY and Snoop appeared on Jimmy Kimmel Live, since being uploaded Sunday night, the “Hangover” video has already been viewed more than 6.6 million times.

”Hangover” precedes another PSY single, “Daddy,” which is said to be coming later this summer.

The video for “Gangnam Style,” the 2012 viral song that made Korean rapper Psy a global star, has achieved another world record by garnering 2 billion views on YouTube.

It has also amassed 8.3 million likes and 5.18 million comments as of this writing.

The milestone was reached on May 31, a year and 10 months after it was uploaded on YouTube in July 2012.

American rapper T-Pain took to Twitter to comment how “amazing” it is. Singer Josh Groban, on the other hand, tweeted, “It’s a Gangnam Style world, we’re just living in it.”

The song spawned parodies, with other artists, including Grammy winner Nelly Furtado, performing their own version of it.

In October 2012, “Gangnam Style” climbed to the No. 2 spot on the Billboard Hot 100 chart and stayed on the spot for weeks.

The same month, its music video earned 500 million views on YouTube. Psy then graced the cover of Billboard magazine.

The following month, Korea’s Ministry of Culture, Sports and Tourism bestowed on Psy the Order of Cultural Merit for his contribution to spreading hallyu or Korean Wave.

“Gangnam Style” became the third bestselling single in the world in 2012 with 9.7 million copies sold, according to the International Federation of the Phonographic Industry (IFPI).

Last year, it won the Music Video of the Year and International Song of the Year at the NRJ Music Awards in France and Digital Daesang at the Golden Disk Awards held in Malaysia.