Hello Kitty just turned 40, and she’s celebrating the big milestone by hitting up the West Coast. But she’s not leaving Japan for the sunny beaches of California as you might expect. Instead, our favorite cartoon cat is getting her very own exhibit at the EMP Museum in Seattle, WA.

Starting on November 14, the Hello! Exploring the Supercute World Of Hello Kitty retrospective will be on display, honoring the 40th anniversary of Sanrio‘s bow-wearing and pink-loving pop culture phenomenon—even though we don’t think she looks like she’s aged a day.

The exhibition, which comes straight from the Japanese American National Museum in Los Angeles, will look back at Hello Kitty’s evolution over time. And get ready for some major flashback moments. Among the artwork and pieces featured will be over 600 Hello Kitty products that have been released since the character was just a wee little kitten. Some of the vintage treasures like stationery and the first telephone to feature Hello Kitty go back as far as the 1970s. But the exhibit also features more modern pieces, such as the iconic plush toy-covered Hello Kitty dress worn by Lady Gaga in 2009 (shown above) and a couture bustier that Katy Perry wore to the Brit Awards that same year.

You can catch the fabulous feline’s exhibit in Seattle through May 2016. And the Sanrio star’s East Coast fans may get to join in on the fun soon, too. The brand is hoping to bring the exhibit to additional museums throughout the country, although specific plans have yet to be announced. We’ll be keeping our fingers crossed.

“The Gaze of Kitty” by Kazuki Takamatsu

“Kittypatra” by Simone Legno for Tokidoki

Sanrio seems to be going all out this year for Hello Kitty’s 40th birthday. In fact, the world’s first ever Hello Kitty Con was held this past weekend. And don’t worry if you missed it. The convention may be over, but the birthday celebrating sure isn’t.

So why all the big fuss, you ask?

Sanrio’s Yuko Shimizu introduced this iconic, mouthless kitty in 1974. According to Sanrio, Hello Kitty, who’s actual name is Kitty White, was born in London, England. She is the same height as five apples stacked on top of one another and her weight is three apples put together.

By 1999, Hello Kitty was appearing on 12,000 products yearly. By 2008, Hello Kitty was responsible for half of Sanrio’s billion dollar revenue. There were over 50,000 different Hello Kitty branded products in more than 60 countries.Today, Hello Kitty is worth $5 billion a year and has become a worldwide phenomenon.

Check out the  Top 15 Adorable Hello Kitty Cakes below.

In celebration of the 40th anniversary of everyone’s favorite expressionless cat, the Japanese American National Museum in Los Angeles is hosting the largest ever retrospective on Hello Kitty to be held in the United States.

Titled “Hello! Exploring the Supercute World of Hello Kitty,” the exhibition encompasses a selection of rare and unique Hello Kitty-branded items chosen from the Sanrio archives, alongside contemporary artworks by artists including Buff Monster, Edwin Ushiro, Paul Frank and Kozyndan. In these art pieces, the iconic feline is reinterpreted into a number of wonderfully weird and wacky mélanges of disparate pop culture motifs, in doing so paying homage to Hello Kitty’s wide-ranging impact on art and culture throughout its 40 years in the limelight.

Curated by Christine Yano, author of Pink Globalization: Hello Kitty’s Trek Across the Pacific, and Jamie Rivadeneira, founder and owner of the Los Angeles pop culture boutique JapanLA, you can buy your tickets for this retrospective here before it ends in April 2015.

Hello Kitty fans, make some plans to be in Los Angeles. The Japanese American National Museum invites you to Hello! Exploring the Supercute World of Hello Kitty, a special exhibition in celebration of the 40th anniversary(!) of pop icon Hello Kitty, running October 11 through April 26, 2015.

The first-of-its-kind exhibition will combine a product-based historical and sociological examination of Hello Kitty, including rare and unique pieces from Sanrio’s archives, with an installation of mixed media works by artists demonstrating Hello Kitty’s influence on contemporary art.

Hello! is curated by Christine Yano, PhD, author of Pink Globalization: Hello Kitty’s Trek Across the Pacific, and Jamie Rivadeneira, founder and owner of the Los Angeles pop culture boutique JapanLA. The exhibition’s six-month run will also include lectures, panel discussions and workshops.

Here are some more details about the exhibit:

This unprecedented two-part exhibition includes an extensive product survey with rare and unique items from the Sanrio archives, curated by Christine Yano, PhD, and author of Pink Globalization: Hello Kitty’s Trek Across the Pacific. It also features a selection of innovative contemporary artworks inspired by Hello Kitty and her world, curated by Jamie Rivadeneira, founder and owner of the Los Angeles pop culture boutique JapanLA.

Organized as part of the global icon’s 40th-anniversary celebrations, Hello! examines the colorful history of Hello Kitty, her influence on popular culture, and her evolution from a simple Japanese children’s graphic to a wildly successful lifestyle brand bridging east and west and crossing multiple generations.

Hello! Exploring the Supercute World of Hello Kitty is a specially ticketed exhibition.

For further information about the Hello! exhibition, visit JANM’s website.

10/09/2014Team-Yellow Leave a comment
Hello Kitty first made her way to the United States in 1976. This plush doll, from the same year, will be the oldest item on view at an exhibition devoted to the cartoon icon at the Japanese American National Museum. (Sanrio)
LA Times:
Her expressionless mug has been featured on countless toys, not to mention bowling balls, motor oil, a Fender Strat, a pricey Judith Leiber clutch, sanitary napkins and mens underwear. She’s inspired a controversial song by Avril Lavigne, works of sculpture by Tom Sachs and a pretty spectacular dress worn by Lady Gaga.

I am talking about Hello Kitty, the adorable cultural force that began life as a character on a coin purse in Japan 1974. Produced by Sanrio, she arrived in the United States two years later. And she’s been a part of global popular culture ever since.

This fall, she is set to take L.A. by storm, with a full-blown retrospective of Kitty art, merch and fashion at the Japanese American National Museum, which opens in mid-October. Two weeks later, the first ever Hello Kitty Con, will be held at the Museum of Contemporary Art. 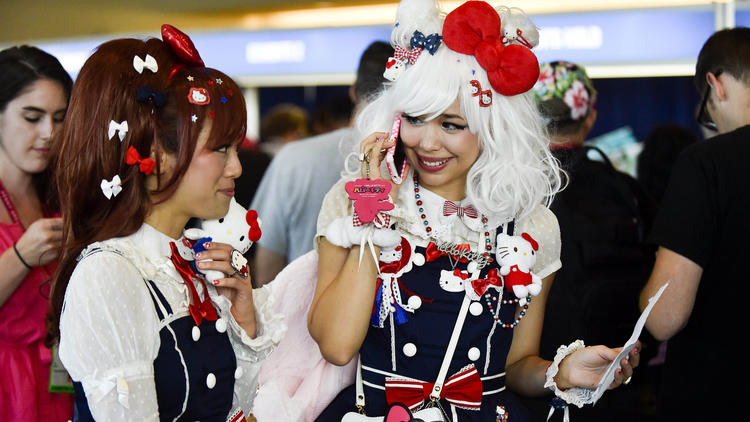 Christine R. Yano is an anthropologist from the University of Hawaii (and currently a visiting professor at Harvard) who has spent years studying the phenomenon that is Hello Kitty. She is also the author of the book “Pink Globalization: Hello Kitty’s Trek Across the Pacific,” published by Duke University Press last year. She says that Kitty’s unreadable features (she usually doesn’t have a mouth), along with clever merchandising, has helped cultivate the character’s following.
“Hello Kitty works and is successful partly because of the blankness of her design,” Yano says. “People see the possibility of a range of expressions. You can give her a guitar, you can put her on stage, you can portray her as is. That blankness gives her an appeal to so many types of people.”

That also makes her more than just another fabrication of Japan’s culture of cute, known as kawaii.

“She doesn’t have this insipid cuteness,” explain Yano, who is also serving as curator for the Japanese American National Museum’s retrospective. “It’s something clever and creative which contributes to a certain cool factor. For example, take Precious Moments [giftware]. That’s cute. But there’s nothing cool about Precious Moments. Hello Kitty has the potential to be so many other things.”

This year, Kitty turns 40 — and her power as icon and brand shows no sign of abating.

But there’s a lot we don’t know about Hello Kitty. And, Yano, who is currently wading through hundreds of objects for the exhibition at the the Japanese American National Museum (including the famous Gaga dress), gives us the lowdown: 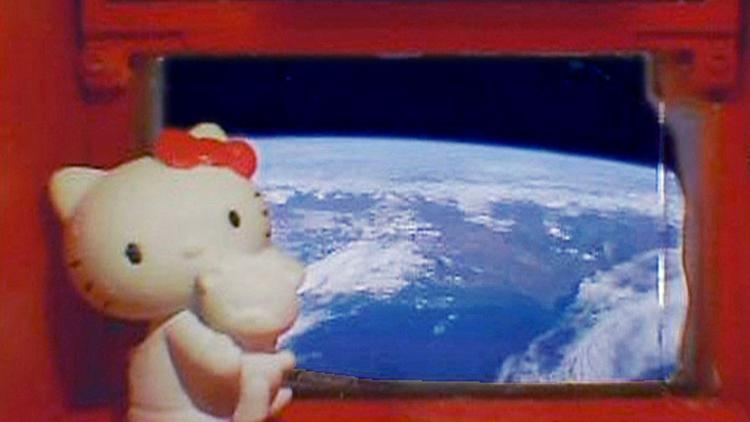 This year, Hello Kitty even traveled into space aboard the Japanese satellite Hodoyoshi-3.
Hello Kitty is not a cat.
You read that right. When Yano was preparing her written texts for the exhibit at the Japanese American National Museum, she says she described Hello Kitty as a cat. “I was corrected — very firmly,” she says. “That’s one correction Sanrio made for my script for the show. Hello Kitty is not a cat. She’s a cartoon character. She is a little girl. She is a friend. But she is not a cat. She’s never depicted on all fours. She walks and sits like a two-legged creature. She does have a pet cat of her own, however, and it’s called Charmmy Kitty.”

I grew up with Hello Kitty everything and all I have to say is, MIND BLOWN.

Kitty is actually named Kitty White and she has a full back story. She is a Scorpio. She loves apple pie. And she is the daughter of George and Mary White.

“She has a twin sister,” adds Yano. “She’s a perpetual third-grader. She lives outside of London. I could go on. A lot of people don’t know the story and a lot don’t care. But it’s interesting because Hello Kitty emerged in the 1970s, when the Japanese and Japanese women were into Britain. They loved the idea of Britain. It represented the quintessential idealized childhood, almost like a white picket fence. So the biography was created exactly for the tastes of that time.”

Yes, she’s worldwide. But Hello Kitty has had special resonance with Asians who grew up in the United States.

“When Hello Kitty arrived in the U.S. in the mid-1970s, it was a commodity mainly in Asian enclaves: Chinatowns, Japantowns, etc.,” explains Yano. “In talking to Japanese Americans who grew up in the 1970s, they say, ‘That figure means so much to us because she was ours.’ It’s something they saw as an identity marker. This is why the exhibition is being held at the Japanese American National Museum. It’s about reconnecting her to this community. It gives the whole thing a certain poignancy and power.” 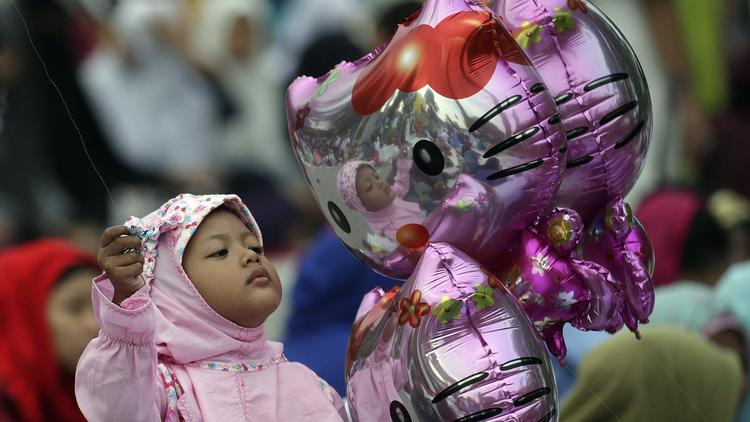