Check out a recap here and be sure to check out the exhibition for yourself if you’re in the area.

French mosaic specialist Invader is returning to Hong Kong for his first solo show entitled “Wipe Out” at The Qube. Earlier in 2015 Invader’s works around Hong Kong were removed by street cleaning crews within a week of being finished and this, a new body of works, is set to be a response to that experience. Featuring LED, sculpture and a sticker-covered scooter, the exhibition will open May 2 and all proceeds from souvenirs will help support the charity Pathfinders.

In order to tie in the French cuisine on offer with contemporary street art, a new history for the building was created – the abandoned regional headquarters of the fictional “Compagnie Générale Française de Tramways” (CGFT). Things like furniture, train timetables and unused ticket rolls are included as part of the design, inviting the new inhabitants, squatters and artists who gather in the vacated building to share food and ideas. Subway ventilation systems are hinted at through brass pipes while complex light fixtures appear as train signal lights. Abandoned construction sites are referenced through the bars, which are crafted from layers of unevenly stacked marble, with individual dining tables created from misaligned stone slabs.

Take a look inside the space above and be sure to pay the diner a visit should you ever be on Hong Kong’s Hollywood Road.

A couple of days ago, the South China Morning Post reported that angry Hongkongers discovered that the street artworks by French artist Invader have been removed.

Following the fate of the late “King of Kowloon” Tsang Tsou-choi’s colourful calligraphy, it didn’t take long to discover that the deed was done – again – by the Highways Department.

Just like in the past, the department does not think it has offended anyone. On the contrary, it claimed that it took down the artworks for “safety” reasons. (Just how unsafe are mosaic tiles stuck on the walls around town?)

Having invaded more than 60 cities around the world, I have never faced a situation where a public authority would systematically and rapidly remove the art from the streets
INVADER, ARTIST

The incident has caused outrage among not just the arts community but also netizens who appreciated Invader’s works, which used to brighten their day.

Many accused the government of being schizophrenic. On one hand, it spends billions to build the West Kowloon Cultural District, but on the other it cannot tolerate art coming to life in the real world of Hong Kong.

The Home Affairs Bureau, which handles arts and culture, distanced itself from the Highways Department, saying that the removal had nothing to do with them.

The amusing Pac-Man tile mosaic between Tin Hau and Fortress Hill is gone. But now the famed French artist, whose creations were inspired by the 1978 arcade game Space Invaders, is speaking up.

He is not just disappointed to see his artworks being removed. Just like many Hongkongers, he questions the authorities’ intentions in erasing his “gift” to the city and the confusing messages the government is sending to the people of Hong Kong.

Below is a full statement from Invader, sent through his assistant:

I am Invader, a contemporary artist known for having created and displayed thousands of artworks around the world. My artworks are exhibited in fine art galleries, museums and institutions but also in the streets of large international cities which I artistically “invade”.

I travelled to Hong Kong last January for a new “wave of invasion” in this vibrant city. It was my third time in Hong Kong and I created and installed 48 new pieces; a very good score.

A few days ago, I was alerted on social networks through pictures and comments that government workers were removing some of the artworks displayed in the streets.

Having invaded more than 60 cities around the world, I have never faced a situation where a public authority would systematically and rapidly remove the art from the streets and I hope it won’t happen in Hong Kong either, and that those removals are just an illustration of the rule of [that] “10 per cent” of my creations are usually destroyed quickly.

I am of course very saddened and affected by these removal actions. I fully understand that having my work damaged, stolen or removed is an inherent risk with displaying contemporary art in an urban environment. I knew that Hong Kong was very strict with artworks displayed in the streets and that the government did remove nearly all of Tsang Tsou Choi’s (King of Kowloon) works.

Nevertheless I hope these policies are part of the past as the city is now aspiring to become the cultural hub of Asia. International art galleries can be found in many corners of the city; Art Basel is held every year at the Convention Center; the exciting M+ museum is being built.

I really consider that my approach of displaying the pieces in the street is a gift to the city and its citizens. It is a way for me to enhance people’s everyday life. They don’t need to go to museums or art galleries; they can just look up on the walls and maybe be touched by my “urban acupuncture”.

There are of course many pictures and data to document this process but it would be a pity that the Hong Kong part of the puzzle would be only visible through archive photographs.

I love Hong Kong. Its people gave me a great welcome and it was a real pleasure to spend several weeks rediscovering the city; its heritage, its futurism and its dynamism.

To the Hong Kong authorities, in case they intend to wipe out the entire invasion colony, I only ask: What message would you send to your citizens? What modern cultural heritage do you want to leave them? What is the real place of art in your beautiful city?

Save the Space Invaders / Save the Invasion of Hong Kong! 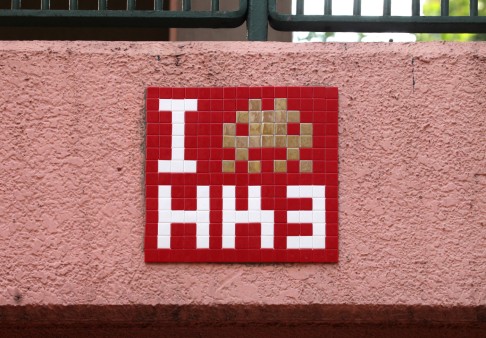 Invader, who said he ‘loves’ Hong Kong, urged the people to save his art.