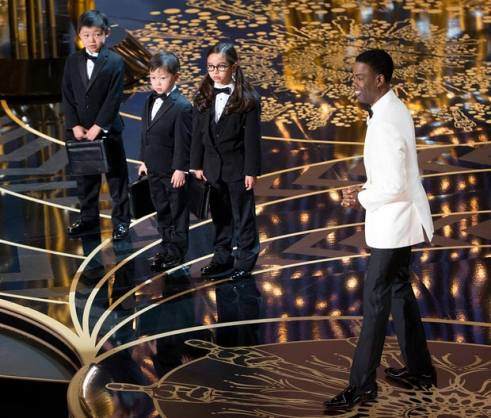 The Academy of Motion Picture Arts & Sciences apologized on Tuesday for the Asian jokes on the Feb. 28 Oscar telecast, after receiving a protest letter signed by 25 AMPAS members, including Ang Lee.

An Academy spokesperson issued the statement, “The Academy appreciates the concerns stated, and regrets that any aspect of the Oscar telecast was offensive. We are committed to doing our best to ensure that material in future shows be more culturally sensitive.”

ORIGINAL POST: Two dozen members of the Academy of Motion Picture Arts & Sciences, including Ang Lee and several other Oscar winners, have asked the AMPAS board for “concrete steps” to ensure that future Oscarcasts will avoid the “tone-deaf approach” to Asians that was exhibited in the Feb. 28 ceremony.

The protest was delivered in advance of Tuesday’s board meeting, where diversity promises to be a key item on the agenda. The missive was sent to the board, AMPAS President Cheryl Boone Isaacs, CEO Dawn Hudson, and ceremony producers Reginald Hudlin and David Hill.

The letter said, “We are writing as Academy members of Asian descent to express our complete surprise and disappointment with the targeting of Asians at the 88th Oscars telecast and its perpetuation of racist stereotypes. In light of criticism over #OscarsSoWhite, we were hopeful that the telecast would provide the Academy a way forward and the chance to present a spectacular example of inclusion and diversity. Instead, the Oscars show was marred by a tone-deaf approach to its portrayal of Asians.

“We’d like to know how such tasteless and offensive skits could have happened and what process you have in place to preclude such unconscious or outright bias and racism toward any group in future Oscars telecasts. We look forward to hearing from you about this matter and about the concrete steps to ensure that all people are portrayed with dignity and respect.

“We are proud that the Oscars reach several hundred million people around the world of whom 60% are Asians and potential moviegoers.”

According to the International Energy Agency, Asians represent 4.3 billion, or 60% of the population. However, they are estimated to represent less than 1% of the Academy.

Sources close to the show told Variety that Chris Rock made decisions about his material (including a series of jokes about Asian children), while Sacha Baron Cohen’s crack was apparently ad-libbed. However, at a time of heightened sensitivity with racial matters, many viewers were shocked that old Asian stereotypes were trotted out for a laugh.

If you’re in New York City, check out the theatrical premiere of “A Picture of You,” opening this Friday, June 20 at the AMC Loews Village 7 in Manhattan.

NY Times: The CW series “Nikita” begins its fourth and final season on Friday — an abbreviated run to tie up story lines, as the reluctant assassin Nikita stands falsely accused of killing the president — and while there’s still a chance, I’d like to celebrate a small but significant milestone. For six more weeks, two of the strongest and most interesting female leads on television are being played by Asian-American actresses.

I’m talking about Maggie Q, finishing her turn as Nikita, and Lucy Liu, in her second season as Joan Watson on CBS’s “Elementary,” where she is every bit as central as Jonny Lee Miller’s Sherlock Holmes. Both shows have their formulaic elements, but Nikita and Joan are noncartoonish, reasonably complex, multidimensional characters, and in prime time, there aren’t too many actresses getting that kind of opportunity in a lead role. Julianna Margulies in “The Good Wife,” Connie Britton in “Nashville,” Claire Danes in “Homeland,” Lizzy Caplan in “Masters of Sex.” It’s a short list.

Of course, that broader look also indicates that the overall picture for Asian actresses (American, Canadian and otherwise) isn’t so happy. A lot of them are working, but in roles far down the food chain from Nikita and Watson, and often playing characters conceived or shaped to reflect longstanding stereotypes about Asians.

Even Maggie Q and Ms. Liu haven’t completely escaped those archetypes. Both are playing the latest iterations of durable characters traditionally inhabited by white performers, so it would seem that race shouldn’t have any particular bearing. But the truth is that they resonate with two of the most common sets of images — or clichés — about Asian women: the high-achieving, socially awkward Dr. Joan Watson is a refined example of the sexy nerd, and the lethal, sometimes icy Nikita, able to dispense violence while wearing tight, microscopic outfits, evokes a long line of dragon ladies and ninja killers.

(You could argue that the association exists only because Maggie Q was cast as Nikita, who is based on a French film character, but it’s a self-canceling argument: The men who created the show sought her out for the role.)

In both cases, though, the actresses and their writers have avoided or transcended easy stereotypes. A lot of effort has gone into humanizing Nikita, and making her a sisterly or even maternal figure for the younger assassin Alex (Lyndsy Fonseca), and the emphasis on violent action has decreased over the show’s run. In “Elementary,” Watson has embraced her role as apprentice detective after suffering a catastrophic failure as a doctor, taking some of the shine off her super-competence. And unlike other characters in the same mold, she appears to have a normal, nonneurotic romantic life.

Clothes also tell a tale. Maggie Q fought some battles over her costumes in the early days of “Nikita,” and she has spent progressively more time in plain, covered-up (though still closefitting) workout-style ensembles and less in skimpy red dresses. Ms. Liu’s outfits, mostly chosen by the costume designer Rebecca Hofherr, have attracted a following of their own. The majority opinion seems to be that they reflect Watson’s quirky but confident style. To my eye, they have a clever awfulness, making Ms. Liu look good while signaling that perhaps she doesn’t spend as much time as she could in front of a mirror.

Either way, what Watson’s clothes don’t do is make her look ridiculous or hide Ms. Liu’s attractiveness. That’s the fate of some other Asian-American actresses in roles that play more obviously to geekiness or braininess, and are visually coded for easy comprehension. Liza Lapira wears fright clothes and dowdy haircuts as the sidekick Helen-Alice on “Super Fun Night” (ABC), something she already endured as the eccentric neighbor on “Don’t Trust the B — — in Apt. 23” last season. On “Awkward” (MTV), Jessica Lu, as the rebellious daughter of strict Chinese parents, sports a hat with ears while Jessika Van, as her Asian rival, is dressed in starched outfits that make her look like an Amish schoolteacher. Both Ms. Lapira and Ms. Lu are accessorized with glasses — big black ones — something neither appears to wear in real life. Also occasionally donning glasses is Brenda Song as a video-game company executive in “Dads,” on Fox, though her most distinctive costume remains the sailor-girl outfit she wore in the pilot, part of an extended joke about the sexualization of Asian women that didn’t accomplish much besides sexualizing an Asian woman.

And there are other actresses playing less evolved versions of the Nikita-style action hero. Ming-Na Wen’s Melinda May, the black-leather-jacketed pilot in “Marvel’s Agents of S.H.I.E.L.D.” (ABC), is a stoic enforcer with a dragon-lady vibe; Grace Park’s Kono Kalakaua on “Hawaii Five-0” (CBS) is equally lethal (she often does most of the kicking and punching) but favors bikinis and tight jeans. On “Once Upon a Time” (ABC), Jamie Chung plays the Disney version of a mythical Chinese swordswoman.

It takes some looking to find Asian actresses in roles that don’t easily fit into one of these two broad categories. There are a few jobs in a third category, the manipulative or overly protective Asian mother: Jodi Long on “Sullivan and Son” (TBS), Lauren Tom on “Supernatural” (CW). On the entertaining but paper-thin “Beauty and the Beast” (also on CW), Kristin Kreuk stars as a cop who just happens to be mixed race. There is, of course, a major Asian-Canadian female television star not mentioned yet: Sandra Oh, whose Dr. Cristina Yang is not the lead but is a major member of the ensemble on ABC’s “Grey’s Anatomy.” As with Nikita and Watson, Yang displays some typical Asian markers — she’s a hypercompetitive, socially awkward doctor — whose race is matter of fact because there’s so much more to know about her. Yang, along with Watson and Nikita, could be considered exceptions that prove a rule, but I think the real lesson here is probably that TV would be a better place for women of all races if Shonda Rhimes (“Grey’s Anatomy,” “Scandal”) could just write all the shows.