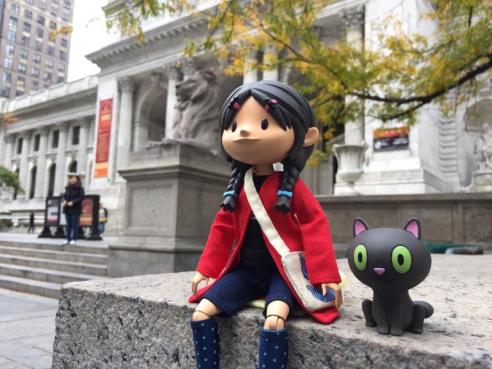 After watching their own kids play, David Horvath and Sun Min (Award Winning Designers of Uglydoll) began a discussion with Klim Kozinevich (Creative Director of Bigshot Toyworks) and wondered; what if there was more? The worlds of princesses and pixies, fashion models and super heroes are all fantastic, but something was missing. The trio set out to create a unique personality in a small plastic body, focusing on aspirational, inspirational and imaginative play. Something that would encourage kids around the world to embrace what makes them who and what they are, inside and out. With all that in mind, Yuna was born!

Yuna is the very first doll in an all new line called Dream BIG Friends. She’s also the first Asian American girl to be the center of a doll line! She loves science, travel, rockets, art, design, and Korean food. Her BIG dream is to run a company designing rockets that will one day take her to Mars. She’ll be the first one to stand on the planet’s surface, naturally. With your help, she’s sure to get there.

Today heralds the launch of a Kickstarter campaign for Dream BIG Friends, where you can invite Yuna and her cat Kamata into your home.

There have been many discussions about body types and unrealistic proportions and attitudes imposed through children’s toys these days. David, Sun Min and Klim wanted their first doll, and all of her friends, to feel like very real characters, complete with rich backgrounds and boundless potential… Avatars for your imagination. Made with high quality materials and built to last, our BIG Dream is that one day far from now, your kids will share Yuna with their kids.

RocketNews 24:   Even if you’re more of a dog person, there’s no denying that neko-mimi have a cuteness all of their own. Knowing this, the creative folks over at Axent Wear, an independent startup now just weeks away from launching a Kickstarter campaign, are hoping to bring cat ears into consumers’ lives in a way that is both cute and functional with a product that’s sure to put a smile on your face and spring in your step. Introducing: Axent Wear cat-ear headphones. Currently still a prototype, these unique headphones are designed to introduce a little extra style and individuality to typical headwear. Featuring chunky over-ear cans, headband-mounted ear-shaped speakers and brightly coloured LEDs, these headphones are sure to attract a lot of attention when worn in public, and when they do you’ll be able to share your tunes with a mere flick of a switch.

▼ The prototype really is the cat’s meow. Or should that be mimi?

Formed by Berklee graduates Wenqing ‘Yuumei’ Yan and Victoria Hu, Axent Wear came into being when a sketch Wenqing drew back in 2009 received an enormous amount of positive feedback online. Inspired by the comments and excitement the picture generated, Wenqing and her friend set out to make the headphones a reality. Though we’re still a little way from being able to slip on a pair of these musical mimi for ourselves, Axent Wear is set to launch a Kickstarter campaign and take preorders sometime in the next couple of months, and with their Facebook page having already received over 50,000 likes, chances are it’ll be a huge success. Details about available styles are still thin on the ground at this stage, but judging from their stylish concept images, Axent Wear can be relied on to make a product that looks as good as it promises to sound.

For more information and to get a heads-up as soon as the crowd-funding campaign goes live, sign up at Axent Wear’s homepage. Alternatively, you can leave questions, comments and feedback on Tumblr or Facebook.   Check out this link: