If you’re a history buff, or time traveler, this could come in handy.

With all apologies to Nara, nowhere in Japan can match Kyoto’s reverent connection to its history. The city served as the seat of imperial power for centuries, most gloriously during the Heian period of the 9th to 12th centuries.

Walking along the city’s streets can sometimes feel like taking a trip into the past, and if that’s where you’re going, you’ll want a period-accurate map, like the interactive one developed by Kyoto’s Ritsumeikan University.

Called the Heiankyo Overlay Map, the clever navigational tool (which can be found here) works with Google map’s data for the city.

Despite its massive population, China‘s list of common last names is very small. Here’s where people with these names are concentrated:

One of the most striking things you realize after spending time in China is how certain last names are very, very common.

For a country of 1.3 billion people, there is a remarkably small number of common last names in China. An estimated 87 percent of the population shares one of 100 surnames, and more than one in five Chinese citizens is surnamed Li, Wang, or Zhang: more than 275 million people in all. (By contrast, 90 percent of the United States population encompasses over 150,000 different last names).

Less known, however, is that the most common Chinese names have a geographic “base” within the country. These fascinating maps, put together by China-focused writer Andrew Stokols using data from this site, tell us where Chinese names are most heavily concentrated in the country. Li, Wang, and Zhang, which comprise over 20 percent of the population, are most commonly found in China’s northeast, where the ethnic Han majority is most predominant.

Here is a map, for example, of the surname Li:

Not all highly-common names are common in the Northeast, however. Take Chen, for example, which dominates China’s southeastern provinces.

And here’s Ma (which literally means “horse”); due to the name’s historic association with China’s Muslim Hui minority, people surnamed Ma are common in the northwest of the country, where much of China’s Islamic population is based. 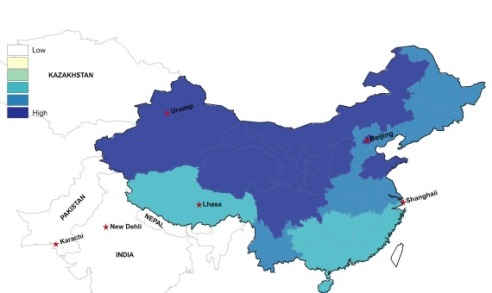 Of course, that certain last names have geographic bases within a country is hardly unusual; Americans with Scandinavian surnames, for example, are very common in states like Minnesota and the Dakotas. But what will be interesting is revisiting these maps in 20 or 30 years. Internal migration—a force that affects at least a tenth of China’s population, and probably much higher—has only been a major force in the country over the last two decades, and its effects on the country’s demographics are only partly understood. In the end, China’s distribution of family names seems poised to scatter.

But let’s take it out a little bit further and look at the top 20 surnames in China, a group comprising over 700 million people. 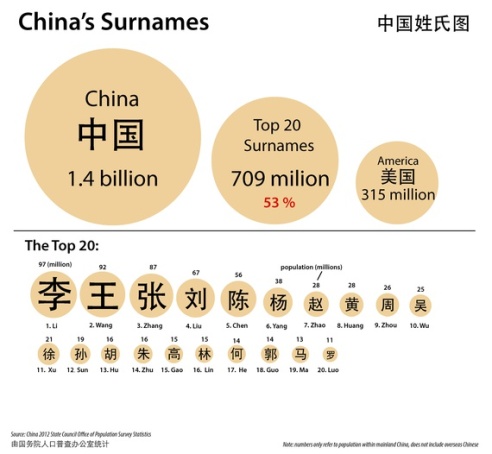 Now, instead of considering which name is most common in each province (which would show a lot of Li, Wang, and Zhang), let’s flip it around: for each of the top few dozen names, in which province do they predominate? The more common names here are presented in larger characters, and appear to dominate China’s north.

Also worth noting: The surname Kong, or 孔, which belongs to descendants of Confucius, is prevalent in the sage’s home province of Shandong.

Names are not the only way in which there is regional variation in China, of course. For instance, take height: Northern Chinese people, who for centuries have subsisted on a wheat-based diet, are typically taller than their southern compatriots, who have historically eaten more rice. Interestingly, the Chinese word for “tall,” written as 高, is the 15th most common surname in the country, used by 15 million people. So are people named “tall” actually concentrated in the northern part of the country? Let’s take a look: 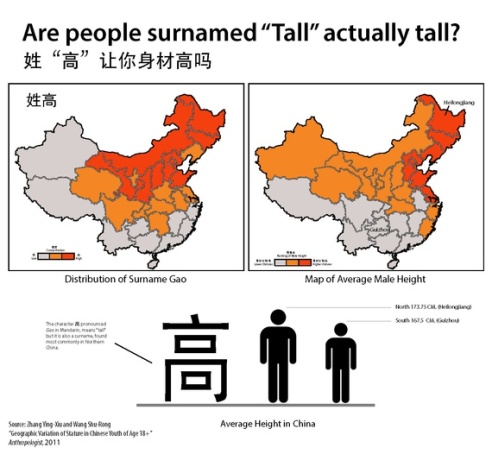 Looks like it. As the diagram on the bottom shows, the average height of people in northeastern Heilongjiang Province is more than six centimeters (about 2.5 inches) taller than the average in southwestern Guizhou.

As it turns out, the bulk of migrants residing in Beijing, Shanghai, and Guangzhou—China’s three largest urban centers—come from provinces near to those cities, rather than from distant parts of the country.

Which just goes to show: Even with all the changes China has undergone in the past 35 years, geographic boundaries and regional differences still matter. As the Chinese saying goes, yi fang shuitu yang yi fang ren, “a certain piece of land and water will raise a certain type of person.”

The geographic distribution of China’s last names… in maps