One company in Japan has put out an honest-to-goodness help-wanted ad for a ninja master.

Twitter user Hojinga recently shared the job posting he came across on a government-run employment website. While it’s likely most visitors to the site are searching for office work, or perhaps positions in the service or industrial sectors, one lucky candidate can walk away with gainful employment as a ninja dojo instructor. 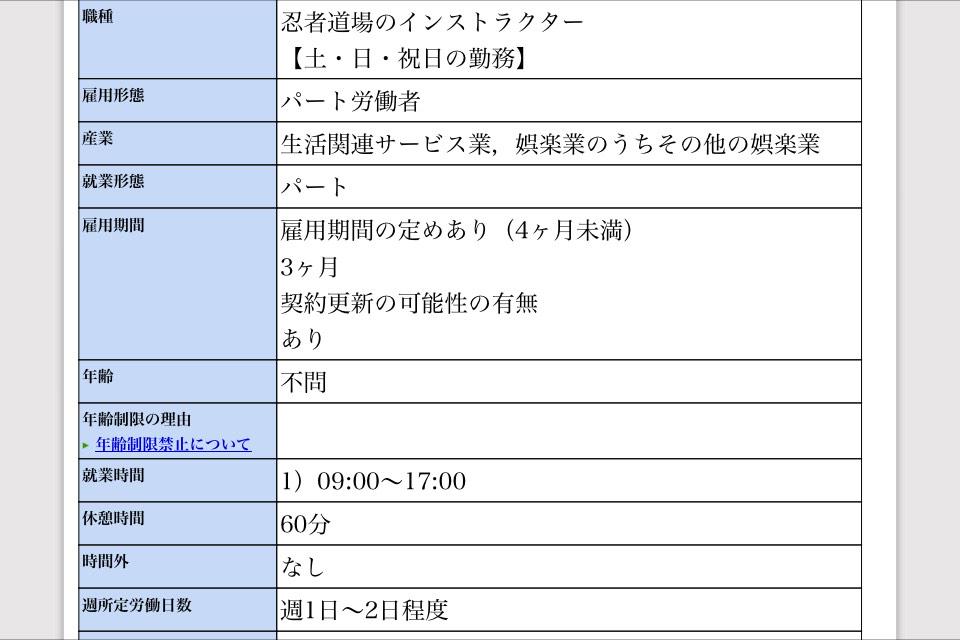 The employer is listed as Koka Kanko Kaihatsu Kabushikigaisha, and while we’re not 100-percent convinced it’s not a cover for a clan of shadow warriors, the organization’s name translates out to Koka Tourism Development, Inc. According to the posting, the selected candidate will be working in Shiga Prefecture’s Koka City, the same town where last week some civil servants performed their duties dressed as shinobi, in honor of the local area’s ninja heritage.

Specifically, the professional ninja will be plying his or her trade at the Koka Ninjutsu Village, which houses a ninja-themed museum, ninja house equipped with trap doors and other contrivances, and a ninja training center where visitors can receive instruction in one of nine different shadow arts.

▼ If, for some strange reason, guests don’t already own their own ninja uniforms, rentals are available.

It will be up to the newly hired ninja master to get these new recruits up to speed so that they can start carrying out acts of subterfuge for their samurai lords as soon as possible…or perhaps show just off their certificates of completion to their non-ninja-trained friends. As is often the case in Japanese employment listings, details are vague on exact responsibilities, but the successful applicant will be expected to participate in performances for visitors, and climbing stone walls is specifically mentioned as one of the employee work duties.

▼ Just another day at the office.

The initial contract is for three months, with the possibility of an extension once the period is completed, with shifts lasting from 9 a.m. to 5 p.m. The ninja master’s skills will only be necessary on Saturdays and Sundays, leaving the successful candidate free to live weekdays under their secret identity.

Hourly pay is to be determined during the interview, but will be in the range of 750 to 1,000 yen (US $6.35 to $8.50). While that’s not a particularly high wage, this job still remains a rare and excellent opportunity to get your foot in the door of the shinobi industry, and may just be the first step to someday becoming Chief Operating Ninja of your own enterprise.