In a move that will surely have a polarizing effect among nostalgic gamers, Japanese video game maker Nintendo will soon venture into smartphone games. It will partner with Japanese mobile gaming production house DeNA to develop games for mobile devices that make use of Nintendo’s extensive portfolio of iconic games and characters in an attempt to “ensure the quality of game experience that consumers expect.” The move comes years after facing increasing competition from other companies, including PlayStation maker Sony and Xbox maker Microsoft, who have been offering customers a mobile experience.

The cross-platform service will run across smartphones, tablets, PCs and Nintendo’s own devices, and is set to launch in fall of this year.

As Sony prepares to complete the sale of its VAIO PC brand in July, the new brand is already setting plans in motion to pick up where it left off. Officially founded on July 1, the VAIO Corporation has started selling both the VAIO Fit and VAIO Pro computers in Japan without Sony branding, although the tech giant is offering a helping hand by carrying the brand on its website.

VAIO has said that it will keep things compact for the time being, retaining no more than 240-300e mployees but keeping VAIO’s legacy and design DNA intact. The company was taken on by Japan Industrial Partners (JIP) with Sony investing five percent in the company while it refocuses its development and sales direction on smartphones and tablets.

VAIO has so far yet to announce whether it will take its operations overseas outside of Japan.

Sony Electronics is closing 20 of its 31 US-based store locations, the Japanese consumer electronics giant announced this afternoon. The news follows layoffs at Sony affecting approximately 5,000 employees worldwide; it’s unclear if European or Asian Sony stores are affected by today’s news (we’ve asked). The announcement release cites Sony’s need, “to maintain its competitiveness in an evolving consumer electronics market” as the reason for the closures.

The company also sold off its PC business last month, making today’s news yet another step in the ongoing restructuring of Sony.

The 11 remaining stores are mostly in or near major markets: New York City, Los Angeles, and Orlando and Houston. Sony’s two-floor flagship store in New York City is slated to remain open, though the building above it (housing a variety of Sony offices) was sold last year for a cool $1.1 billion. At the time (January 2013), Sony said it’d stay in the building as a renter for “up to” three years.

Sony to shutter two-thirds of its US stores

Sony said it was “addressing various options” as recently as yesterday when it came to its VAIO PC and laptop arm, and while announcing its financial results for Q3 2013, it’s apparently come to a decision. Amid reforming its TV arm (and splitting it into a standalone entity by June 2014), it’s going to sell its PC business and VAIO brand to Japan Industrial Partners (JIP), with the final deal set to be done by the end of March 2014. The company has reported a drop in demand for its PCs in prior financial statements, and (barring the VAIO Flip 11A), Sony didn’t really have much to show from its VAIO range at this year’s CES. During the earnings call today, CEO Kaz Hirai said that it was an “agonizing decision“, and that it was “a very Sony brand… It stirred up the PC market.”

The company says it’s no longer designing and developing PC products, while manufacturing and sales will wrap up after the company’s final VAIO range goes on sale globally. It has decided to focus on those post-PC products (yep, smartphones and tablets), meaning that it had to make some big decisions with less successful parts of the business. During Q3 2013, it saw “significant profit improvements” compared to the same period last year. Sony saw year-on-year sales increases from its mobile arm, but still forecasts an annual loss of around $1.1 billion (110 billion yen) for the full year: it had previously projected a 30 billion yen profit. The blame is leveled at the businesses its now looking to change. Other highlights include the PS4, which sold 4.2 million units and 9.7 million games in its first six weeks. The games arm also saw a “dramatic increase” in PlayStation Plus subscriptions — something that’s mandatory for multiplayer on the company’s new console.

Sony will cut a total of 5,000 jobs worldwide (1,500 in Japan) by the end of the 2014 fiscal year, while the new PC company has stated that it will hire around 250 to 300 Sony employees, encompassing design, development manufacturing and sales, and will be based in Nagano — where Sony’s current VAIO HQ resides. The company is promising to fulfill all its aftercare warranties. Sony is signed up to invest 5 percent of the new company’s capital to support its launch and smooth over the transition. Restructuring costs across both the TV and PC segments are now set to cost an extra 20 billion yen. Sony is now set to focus on its high-end sets and 4K screens, and hopes that changes will ensure the TV business returns to profitability within the next financial year.

The Chinese government announced on Monday it’s temporarily lifting a ban on the sale of foreign video game consoles in the country. And while surely to many American 11-year-olds a world without video games doesn’t seem like much of a world at all, since 2000, companies like Sony, Nintendo and Microsoft haven’t been able to hawk their gaming wares in China. The reason for the ban? It’s not protectionism, or censorship, but, according to the BBC, the games’ “adverse effect on the mental health of young people.”

Which actually seems like a well-reasoned point, no one ever credits extensive video game playing with increased mental (or physical) health.

But, that doesn’t mean that the game makers are going to be able to produce whatever they want. Here’s the operational plan, via Reuters: “The suspension of the ban permits ‘foreign-invested enterprises’ to make game consoles within Shanghai’s free trade zone and sell them in China after inspection by cultural departments, the government’s top decision-making authority, the State Council, said in a statement.”

Because of the ban, PC and mobile games have dominated the lucrative gaming market in China, still the world’s third largest, with PC gaming taking two-thirds of the $13 billion market, according the BBC. And it’s a market that’s growing fast—38% in 2013 from the previous year. But, Reuters notes, capturing the the hearts and minds of the Chinese gamer may be difficult as an entire generation of young people has grown up without Nintendo, PlayStation and Xbox and the fact that the growth of free games on mobile devices and social networking sites has taken a bite out of the gaming industry’s bottom line. 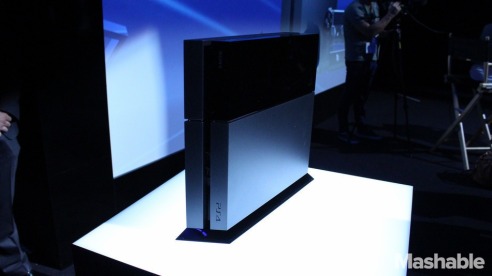 Sony has launched the official PlayStation app for iOS and Android, ahead of the PlayStation 4 launch later this week.

The app lets users access the PlayStation Network from their smartphones and tablets. Even if you’re away from your PlayStation, you can now compare trophies and see what your friends are playing, chat with friends, receive notifications, game alerts and invitations.

You can also browse the PlayStation store, buy games and add-ons and push them to your PS4 system at home.

Other features include using your mobile device as an on-screen keyboard for your PS4 and access to PlayStation system guides, manuals and the official PlayStation blog. The iOS version of the app requires iOS 6.0 and is compatible with iPhone, iPad and iPod touch, but it’s optimized for iPhone 5. The Android variant requires Android 4.0 and up.

PlayStation 4 is scheduled to hit stores November 15 in the U.S., and it’s coming to Europe and Australia on November 29, followed by a December release in other markets, including Saudi Arabia, Hong Kong, Taiwan, Korea and South Africa.