Lee Kuan Yew, the statesman who transformed Singapore from a small port city into a wealthy global hub, has died at the age of 91. The city-state’s prime minister for 31 years, he was widely respected as the architect of Singapore’s prosperity.

But he was criticized for his iron grip on power. Under him freedom of speech was tightly restricted and political opponents were targeted by the courts.

A state funeral will be held on 29 March, after a week of mourning. In an emotional televised address, his son Prime Minister Lee Hsien Loong paid tribute to him.

“He fought for our independence, built a nation where there was none, and made us proud to be Singaporeans. We won’t see another man like him.”

Mr Lee oversaw Singapore’s independence from Britain and separation from Malaysia. His death was announced early on Monday. He had been in hospital for several weeks with pneumonia and was on life support.

UN Secretary General Ban Ki-moon said he was “deeply saddened” by Mr Lee’s death. US President Barack Obama described him as a “giant of history”. The Chinese foreign ministry called him “a uniquely influential statesman in Asia”.

In Singapore, a steady stream of people arrived at the hospital and the Istana, the prime minister’s office, to offer their condolences.

A charismatic figure, Mr Lee co-founded the People’s Action Party (PAP), which has governed Singapore since 1959, and was its first prime minister. The Cambridge-educated lawyer led Singapore through merger with, and then separation from, Malaysia.

Speaking after the split in 1965, he pledged to build a meritocratic, multi-racial nation. But tiny Singapore – with no natural resources – needed a new economic model.

“We knew that if we were just like our neighbours, we would die,” Mr Lee told the New York Times in 2007.

“We had to produce something which is different and better than what they have.”

As the news broke, people began arriving at the hospital to pay their respects

As the morning went on, mourners arrived at the Istana, the prime minister’s office, with flowers and cards

Mr Lee, seen here on 15 August 1955, was determined that Singapore would succeed

As the long wait for the inevitable continued, the floral tributes piled up right outside the city-state’s main hospital, often laid by tearful, older Singaporeans who truly see this sharp-tongued, tough-minded man as a father figure.

And while there were many affectionate comments from well-wishers, there was still some fear of this extraordinary leader, who has dominated Singapore for the whole of its independent existence, and once threatened to rise from the grave if he saw things happening that he did not like.

For all of its impressive successes, this is still a country with Lee Kuan Yew’s imprint visible everywhere. He was unapologetic about the repressive measures he used to impose order, and unapologetic about believing his prescriptions alone were the right ones. No-one is quite sure what direction Singapore will now take without him.

Mr Lee set about creating a highly educated work force fluent in English, and reached out to foreign investors to turn Singapore into a manufacturing hub. The city-state grew wealthy and later developed into a major financial centre.

But building a nation came with tight controls – and one of Mr Lee’s legacies was a clampdown on the press, tight restrictions that remain in place today.

Dissent – and political opponents – were ruthlessly quashed. Today, Mr Lee’s PAP remains firmly in control. There are currently six opposition lawmakers in parliament. Other measures, such as corporal punishment, a ban on chewing gum and the government’s foray into matchmaking for Singapore’s brightest – to create smarter babies – led to perceptions of excessive state interference.

“Whoever governs Singapore must have that iron in him. Or give it up,” he told a rally in 1980. “I’ve spent a whole lifetime building this and as long as I’m in charge, nobody is going to knock it down.”

Has Japan’s Prime Minister Shinzo Abe fallen for one of those “Facebook to start charging” hoaxes?

Abe found himself the butt of the joke in parliament this week after slipping up on the subject of social media. The prime minister proudly told the House of Councillors on Wednesday that of course, he pays his Facebook and Twitter membership fees.

When Democratic Party politician Tsutomu Okubo asked Abe the question in an exchange during a budget meeting on Wednesday, he was clearly hoping to catch him out. And he succeeded.

Okubo first asked if the prime minister operates his social media accounts himself, to which Abe stated that he has help from staff, but the content of the tweets is all him. “My personal account, that one’s run by myself and my staff, basically I decide what we’re going to post about,” he told the assembly.

Next, Okubo asked with a cheeky smirk on his face: “And have you ever paid Twitter and Facebook service fees?”

He must have been delighted when the prime minister walked right into his trap, replying that yes, of course he pays his fees.

Like many world leaders, Abe has two sets of social media accounts, one under his own name, and an official account of the administration of the prime minister (the Kantei). He told the assembly that the fees on personal accounts are the responsibility of the individual:

“Of course, I pay my own fees for my personal social media accounts. But as for the Kantei accounts [the office of the PM], that’s paid for by the Kantei.”

Smiling, Okubo went on to explain what every schoolchild in this day and age knows: that Facebook and Twitter are free to use. For everyone. When he continued to poke the prime minister, asking, “Who are you paying these fees to, then?” there was audible laughter around the room.

▼ Even Abe’s team looked amused at the blunder.

Abe rose again to counter with:

“I don’t actually know about the details of how it works. I decide the content of the posts and my staff do the rest. I think that’s to be expected really.”

Shinto priests walk out from Torii gate after they administer a Shinto rite “Kiyoharai” on the first day of the four-day autumn festival at the Yasukuni shrine on Oct. 17.

The shrine visited by Prime Minister Shinzo Abe on Thursday has often been a lightning rod for criticism by Japan’s neighbors over the country’s wartime past.

The Shinto shrine, located in a Tokyo neighborhood near the political heart of the city, is the nation’s primary war memorial honoring 2.5 million Japanese killed since the late 19th century. It is visited by 5 million people annually, according to Yasukuni officials.

But its role in Japan’s troubled foreign relations with nations such as China and South Korea has been a more recent phenomenon. In 1978 it quietly added to those enshrined 14 “Class A” war criminals from World War II who had been convicted in postwar tribunals by the allied forces. Among them is Gen. Hideki Tojo, who was Japan’s prime minister during most of the war.

The religious act–conducted by the shrine’s head priest–was apparently taken without government consent and made public only a year later.

China and South Korea have long criticized any visits by Japanese political figures as a sign that Japan has not shown sufficient remorse over its wartime history.

The shrine is also a gathering post for Japan’s right-wing groups, who loudly commemorate Japan’s prior military actions. On many weekends, small groups of men dress in pre-war uniforms carry out marching drills. The museum attached to the shrine adds to the controversy, with displays suggesting that Japan was justified in its actions during the war.

The visit by Mr. Abe is likely to reignite much of this controversy, although the prime minister said it was not aimed at other countries.

“It is not my intention at all to hurt the feelings of the Chinese and Korean people. It is my wish to respect each other’s character, protect freedom and democracy, and build friendship with China and Korea with respect, as did all previous prime ministers who visited Yasukuni Shrine,” Mr. Abe said at the conclusion of his visit.

He is the first prime minister to visit Yasukuni since Junichiro Koizumi, whose repeated trips there during his five-year term from 2001 led to a chill in Japan’s ties with China.

Over the years, some lawmakers and historians have tried to resolve the controversy by seeking to remove names of the 14 war criminals at Yasukuni or by building a secular national memorial in a new location. But such efforts never gained traction due to opposition from veterans’ groups and activists, as well as complex Shinto rules that prevent spirits, once joined together, from being separated from each other.

Japan’s emperors have never visited the shrine since the inclusion of the 14. Japanese soldiers fought World War II in the name of Emperor Hirohito, who died in 1989.

A History of The Yasukuni Shrine

1975: Takeo Miki visits the shrine on Aug. 15, the World War II surrender anniversary, as the first prime minister to do so. He goes as a ‘private citizen.’

1978: Names of 14 ‘Class A’ war criminals are added secretly to those of 2.5 million war dead honored at the shrine.

1985: China protests an ‘official’ visit by Prime Minister Yasuhiro Nakasone to the shrine.

2013: Four members of the Abe cabinet and 168 parliament members visit during the April spring festival. China and South Korea protest.

2013: Prime Minister Shinzo Abe visits the shrine on Dec. 26, the one-year anniversary of his taking office.

Japan Shrine An Unwelcome Symbol for Many 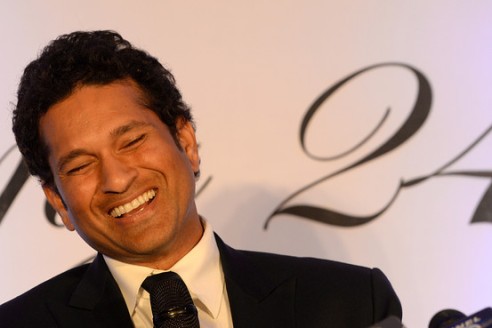 Sachin Tendulkar has been awarded the Bharat Ratna, India’s highest civilian honor, the prime minister’s office said this weekend, when the curtain came down on the cricketer’s career.

“Sachin Tendulkar is undoubtedly an outstanding cricketer – a living legend who has inspired millions across the globe… He has been a true ambassador of India in the world of sports,” it said Saturday.

“The prime minister spoke to Sachin Tendulkar and wished him all success in the what he chooses to do after his retirement. He hoped Tendulkar would continue his association with the world of sport and the people and renew his service to the nation,” another statement added.

Tendulkar, 40 years old, ended his career on Saturday as India beat the West Indies inside three days in the second Test. He scored 74 runs in the first innings as India raced to a total of 495 all out. The West Indies, after scoring 182 on Thursday, could only score 187 in the second innings, leaving India with a whopping victory of an innings and 126 runs.

After the match, Tendulkar’s team-mates carried him around the pitch at Wankhede Stadium in Mumbai, his hometown, and he gave an emotional farewell speech as he looked back on his record-breaking 24-year career.

The man known as the Little Master finished his Test career with 15,921 runs from 200 matches, far ahead of the second highest scorer, Australia’s Ricky Ponting, who ended his career with 13,378 runs. Tendulkar also is the top scorer in One Day Internationals, with 18,426 runs, again way ahead of Ponting in second with 13,704 runs. 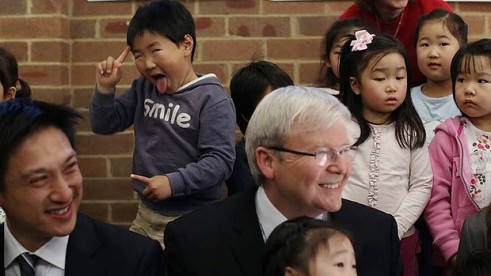 What’s not to love about the photobombing skills of 5 year-old Joseph Kim during a recent photo-op with Australian Prime Minister Kevin Rudd? 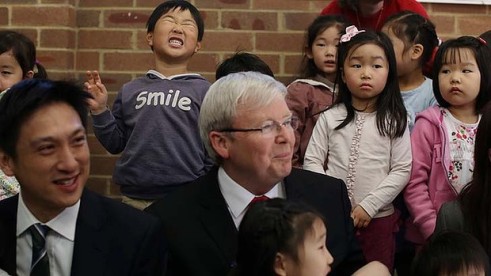