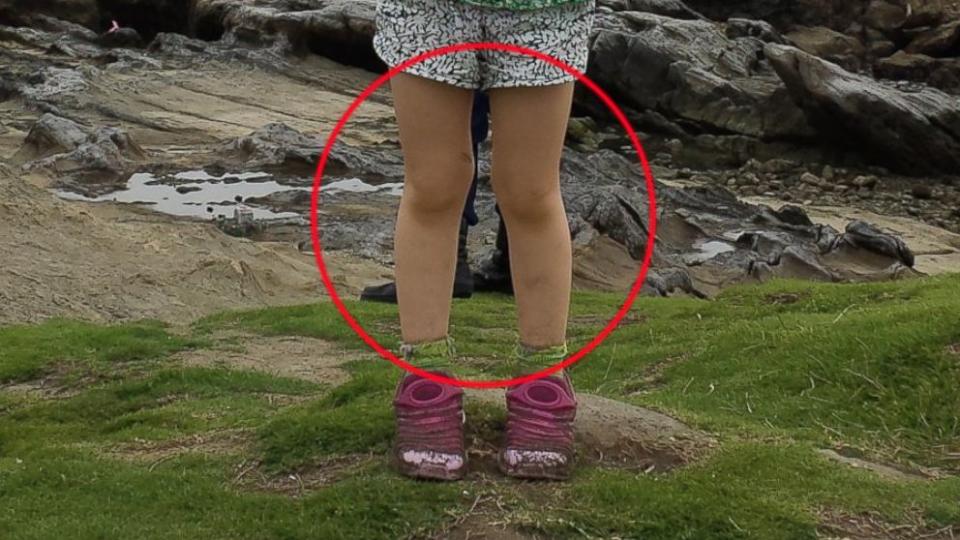 Kanagawa Prefecture has some of the most popular beaches in Japan, especially along the section of the coast known as Shonan. A magnet for both locals and day trippers from Tokyo, when the sun is shining you’ll find a cross section of Japanese society in and around the water, including surfers, partying college students, couples, and families,

This photo of a four-year-old girl on a beach in Zushi, Japan, seems innocent until you look closely behind her legs and back. A closer look appears to reveal a mysterious pair of boots and part of a blue shirt peeking out from behind her.

The photo, which was uploaded to Reddit by a friend of the girl’s father, is making the rounds on Internet. Many are speculating the photo shows a Samurai ghost because the beach the girl and her dad were on was across a samurai graveyard.

“I took a few pictures, and when I was looking through them at night, I noticed what appeared to be a pair of boots behind her in one of the photos,” he said. “I took several of her in the same spot, but only one had the boots.“”My daughter thinks the whole thing is just so funny,” Martin Springall, who took the photo, told ABC News today. “She thinks it’s a ghost, but not a scary ghost — a nice one.”

Springall said the photo was taken on July 6, 2014 during a weekend trip to the beach. He added his family now lives in Toronto, Canada, but had been living in Tokyo at the time.

Springall said he freaked out, and he later showed the photo to his friend Brian Publicover during a camping trip in Japan in August.

Publicover put it up on Reddit’s “Ghosts” subreddit, and theories poured in.

“Some thought it could be the ghost of a World War II sailor,” Springall said.

He added the photo is “completely legitimate” and not retouched in any way.

“My daughter is really shy, and she wouldn’t have taken a picture if there was someone standing behind her, which I would have definitely noticed,” Springall said.

Of course, we’d like to point to the fact that these mysterious leg-free photos are all also taken at a different angle, something that’s pretty easy to see by comparing the direction of the line in the sand that can be seen in the background.

Not only is the “ghost photo” taken at a different angle, it’s also a different distance from the irregularly shaped outcropping that’s directly behind the girl in the picture that’s getting all the attention, so it’s possible that those “legs” are really just “rocks.”

Still, the rumors of supernatural activity persist, in part thanks to Obiaruf’s claim that “I know there are very old samurai tombs nearby,” although he hasn’t offered any specifics as to just whose tomb he’s talking about. For that matter, at the risk of flaunting our first-hand knowledge of the country, Japan doesn’t really do stand-alone tombs. Gravestones, sure, but those are usually inside temples, not stand-alone monuments by the sea. Whole structures to house the dead, meanwhile, are very few and far between, and not really something you’ll find in the part of Japan where Zushi is located.