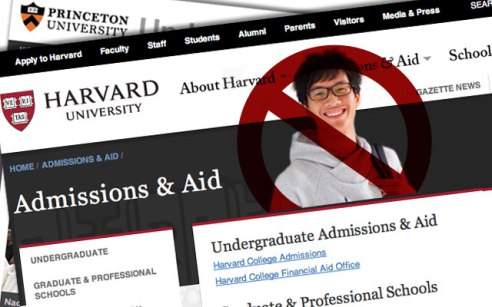 While discrimination by colleges is hardly a new controversy, a series of legal cases in the past several years have put the current system under increased scrutiny. A federal suit filed in Massachusetts last month alleges that Harvard employs “racially and ethnically discriminatory policies” when evaluating undergraduate applicants. The plaintiff, Students for Fair Admissions—an Austin, Texas-based nonprofit—claims that the university’s practices violateTitle VI of the 1964 Civil Rights Act. This provision prohibits recipients of federal funding—which include virtually all higher-education institutions—from discriminating on the basis of “race, color, and national origin.” Students for Fair Admissions is demanding that Harvard formally acknowledge it’s used such policies and promise to eliminate them.

“Harvard was targeted specifically because we felt it had the most discriminatory, troublesome data when it came to the ratio of Asians that were applying to Harvard and the number of Asians Harvard was admitting,” said Edward Blum, who is leading the litigation for the organization. “The data [suggesting discrimination] was most acute at Harvard, though it exists at all Ivy League schools.”

“They’re just looking for an explanation for why their achievements haven’t been rewarded.”

It remains to be seen whether Students for Fair Admissions—which also filed a similar suit against the University of North Carolina at Chapel Hill last month—will have its day in court. Yet, the complaints against these schools illustrate an ongoing debate over the fairness of “holistic admissions,” the process by which higher-ed institutions evaluate applicants as unique individuals rather than as numbers on a page. It’s not just grades and test scores that colleges care about these days; it’s extracurricular involvement, leadership, volunteer work, socioeconomic background—and race. Under this system, highly qualified applicants are routinely rejected and never given an explanation as to why. For rejected applicants of Asian descent, race often appears to be a key factor. But there’s no way they can know for sure; most college officials avoid acknowledging discrimination, simply praising diversity as a virtue instead.

The Harvard complaint notes that Asian Americans comprised more than 27 percent of applicants at the three most selective Ivy League colleges between 2008 and 2012 but represented only 17 percent to 20 percent of their admitted students over the same period. That discrepancy is especially noteworthy considering, according to the complaint, Asian Americans made up roughly 46 percent of applicants in 2008 “with academic credentials in the range from which Harvard admits the overwhelming majority of students.” That threshold was defined as an SAT score higher than 2200, out of 2400 total points.

In other words, as Blum argues, these numbers may suggest the existence of a “behind-closed-doors quota.” The Supreme Court banned racial quotas in higher education in a landmark decision in 1978. If either the Harvard or UNC cases is appealed at the district level, it could make its way to the Supreme Court. And if that happens, the justices might finally render a ruling on affirmative action—the highly controversial practice of favoring minority applicants who belong to historically disadvantaged groups. (The last time that came close to happening was in 2013, when the court declined to reverse any of its previous rulings inFisher v. University of Texas.)

Robert Iuliano, general counsel for Harvard, said in a statement that the school’s admissions strategy is legally sound. “The College considers each applicant through an individualized, holistic review having the goal of creating a vibrant academic community that exposes students to a wide range of differences,” he said. “The University’s admissions processes remain fully compliant with all legal requirements and are essential to the pedagogical objectives that underlie Harvard’s educational mission.”

Anna Cowenhoven, a spokeswoman for Harvard, added that the school will respond to the litigation, which is currently pending.

The complaint against UNC uses much of the same language as the one against Harvard. Specifically, Students for Fair Admissions is arguing that the North Carolina institution has violated federal civil rights laws by allegedly using race as “the dominant factor” in its admissions decisions when “race-neutral alternatives,” such as socioeconomic preferences, are an option. Rick White, who oversees communications and public affairs at the school’s Chapel Hill campus, said in a statement last week that the school stands by its current undergraduate admissions policy: “The University continues to affirm the educational benefits diversity brings to students, as well as the importance of preparing students for a diverse society and assuring a pool of strong state leaders by admitting undergraduates from every background.”

The idea of treating applicants as unique individuals with diverse assets may seem like a no brainer to today’s students and parents. But ask people about their thoughts on which criteria should matter most in the process, and things get complicated. This is especially evident with respect to race. In a 2013 study, the sociologist Frank L. Samson found that white Californians’ views on meritocracy changed based on demographics. Initially, the majority of those sampled agreed that college admissions should generally be determined by objective measures like standardized test scores and GPAs. But when half of the group was told that the percentage of Asian American undergraduates at UC schools was more than double the percentage of Asian Americans living in California as a whole, the respondents switched to supporting more-subjective “intangibles,” like leadership and community involvement. “The results here suggest that the importance of meritocratic criteria for whites varies depending upon certain circumstances,” Samson concluded in the study. “To wit, white Californians do not hold a principled commitment to a fixed standard of merit.”

Samson isn’t the only person to have analyzed how Asian Americans are perceived in higher education. A well-known book published in 2009—No Longer Separate, Not Yet Equal—suggested that students who self-identified as Asian would need about 140 points more on the SAT than their white peers would need to get into elite, private schools. That number jumped to 320 and 450 when Asians were compared to Hispanic and African-American students, respectively.

Meanwhile, at a national gathering in 2006, high school guidance counselors from across the country expressed concerns about how Asians were being treated in the application process, according to an article titled “Too Asian?” by higher-education journalist Scott Jaschik. “Many Asian students and their families have for years believed that quotas or bias hinder their chances at top Ivy or California universities,” Jaschik wrote, referring to a panel that focused specifically on this issue. “But to listen to panelists—and members of a standing room only audience—the intensity of concern has grown, as has mistrust of the system.”

The panel was, like Jaschik’s piece, titled, “Too Asian?”

These perceptions can have negative consequences. One is the “model-minority” stereotype, which undercuts grievances Asian Americans may have against discrimination. Another is that the fear of self-identifying as Asian has in some cases even been correlated with poorer mental health. In separate studies, Asians lacking strong ethnic identities reported lower self-esteem and higher stress, tended to have worse academic achievement, and rated lower scores of acceptance and self-actualization. Such effects undermine the model-minority image.

Of course, not all cases of discrimination are the same. The Harvard complaint centers on an unnamed applicant who scored perfectly on standardized tests and was an AP Scholar, among other laurels. The applicant was the captain of the varsity tennis team, a volunteer fundraiser for National Public Radio, and a peer tutor. According to the complaint, the student has since enrolled at another high-ranking university—one that “does not grant admissions preference on the basis of race or ethnicity,” a policy that appears to be the exception rather than the rule.

The California Institute of Technology and UC Berkeley are two schools that don’t factor race or ethnicity into admissions decisions. While highly selective, the former has seen its number of Asian-American students grow alongside thecountry’s general Asian-American population. UC Berkeley, meanwhile, is subject to Proposition 209 of 1996, an amendment to California’s constitution that prohibits public universities from considering race, sex, or ethnicity in admissions. After Proposition 209 took effect in 1998, Asian enrollment at the school continued to increase, reaching a peak at 42 percent of undergraduates in 2007 and 2008, according to data compiled by UC Berkeley’s admissions office for The Atlantic. This was roughly double the school’s Asian population in 1983. In 2013, Asians accounted for 38 percent of UC Berkeley’s undergraduate population, one percent down from the year before. (California is home to 5.6 million Asians who make up about 15 percent of the entire state. That’s roughlythree times the total percentage of Asians in the U.S.)

By comparison, Harvard’s class of 2018 is 20 percent Asian American. One-fifth may seem like a lot, but as Yascha Mounk, a political theorist at Harvard, pointed out in a New York Times op-ed last month, the proportion of Asians among the school’s undergrads has been nearly flat for two decades. “Damningly, those rare years in which an unusually high number of Asians were admitted were followed by years in which especially few made the cut,” Mounk wrote. “The truth is not that Asians have fewer distinguishing qualities than whites; it’s that—because of a longstanding depiction of Asians as featureless or even interchangeable—they are more likely to be perceived as lacking in individuality.”

Harvard isn’t the only school that’s been singled out for potential discrimination against students of Asian descent. A similar claim made against Princeton in 2011 prompted a federal Department of Education investigation into whether the school had discriminated against an Indian-American applicant by denying him admission. The case, which the department’s Office of Civil Rights couldn’t elaborate on because it’s still ongoing, follows a separate civil rights complaint from 2006 in which a Chinese-American student accused the school of employing the same practices. The 2006 grievance prompted the education department to conduct an across-the-board review of whether Princeton discriminates against Asians.

Martin Mbugua, the spokesman for Princeton, said in an email that the school does not discriminate on the basis of race or national origin. He added that admissions decisions are made on a case-by-case basis, and that “there is no formula for weighing the various aspects of an application.” Enrollment datashows that Princeton’s percentage of Asian-American undergraduates has steadily increased since 2010, from 16.9 percent to 20.8 percent in 2014.

So, should race matter in higher education? That’s a fraught question which will take years to answer—legally, socially, and morally. But if these recent complaints hold water, they could serve as further evidence of what author Jane Hyun called the “bamboo ceiling“: The many challenges Asians face in the business and social sectors, from implicit bias to overt racism.

These challenges have a bearing on K-12 schools, too, suggesting that the the bamboo ceiling may be even lower than once thought. Stuyvesant, one of New York City’s nine specialized public high schools, doesn’t consider race in its admissions process; students only need take a standardized test to apply. Still, the policy has come under fire because of the student demographics that result:73 percent of ‘Stuy’s’ current students are Asian, while 22 percent are white. Just 2 percent of the school’s population are Hispanic, and 1 percent is black.

Upon graduating, many of them move on to top-tier schools. But certain “selling points” of colleges, such as geographic and ethnic diversity, can actually make Stuy students more nervous than charmed, said Casey J. Pedrick, Stuyvesant’s director of college counseling.

“When students begin to receive acceptances, deferrals, and denials, race sometimes comes to the forefront,” Pedrick said. “‘Do you think so-and-so got in because they’re black or Hispanic? Do you think I didn’t get in because I’m Asian?’“

“The poor kids,” she added sympathetically. “They’re just looking for an explanation for why their achievements haven’t been rewarded.”