In the 16th episode of their “100 Years of Beauty” series, Cut Video provides a visual history of the past 100 years of beauty in Japan as modeled by Mei Kurahashi, whose hair, makeup and dance were styled in correlation with the trends of each decade.

01/14/2016Team-Yellow Leave a comment
KCET (by Jessica Placzek):
Furry hats, custom bags, hand-sewn sweaters, and lots of wild prints. These bold fashions are all the rage among the elders of San Francisco’s Chinatown.

Photographer Andria Lo and writer Valerie Luu are chronicling senior style in the neighborhood with their Chinatown Pretty fashion and storytelling project. These days Lo and Luu spend most weekends in Chinatown learning about local style.

Lo and Luu were inspired to create the project while Luu was living in Chinatown.

“Many mornings I would sit in Réveille Coffee, journaling and watching people get off the bus,” Luu says. “I would always notice this woman wearing bright green jade sneakers with this 1980s speckled print. It looked young and fresh but I could tell she was a senior based on her silver bob. She was my fashion missed connection.” 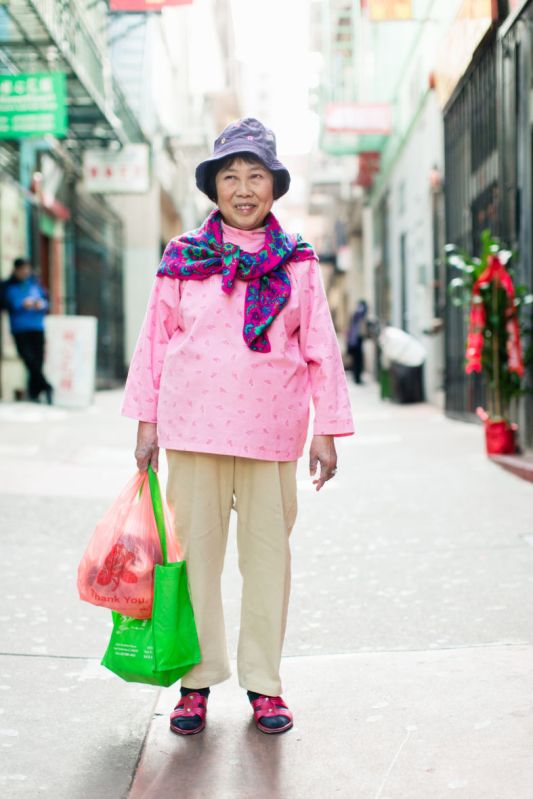 Julie Fong wears a handmade corduroy top. She’s been living in Chinatown for over 50 years.

Man Ta, the woman in the Jade Shoes, is the posterwoman for Chinatown Pretty

Luu met the woman in the Jade shoes a couple of months later. Her name is Man Ta and she became the poster child for Chinatown Pretty.

The project started as a single article for the Bold Italic, a local culture website. Then the Chinatown Community Development Center(CCDC) caught wind of it.

“Somehow we landed on their website and we said, ‘gee this is interesting!’ says Cathie Lam, senior community organizer for CCDC. “We kinda hit a pot of gold!”

The CCDC asked Luu and Lo to turn Chinatown Pretty into a photo exhibition and blog. This is in conjunction with a shop Chinatown initiative, which aims to boost business during the holiday season. Lam says the project comes at a time when neighborhood culture and commerce are being threatened by development.

“The commerce has been affected by the construction especially along Stockton street,” Lam says.

“You know fashion is a very common commodity, or a common thread to help people to see behind all the neon signs, that there are human beings living in Chinatown very actively,” Lam says.Lam thinks fashion can help draw attention to the personality of the neighborhood.

“What I like about Chinatown culture and the seniors that live here is that they are out there,” Luu says. “A lot of people are 80 plus and more active than we are. And can actually can outrun us.”

Both Luu and Lo are Asian, but neither speaks Cantonese, so they usually hit the streets of Chinatown accompanied by a translator. Every weekend they ask dozens of people to share their story and pose for a picture. But for every “yes”, they get about ten “no’s.”

“We’re keeping a log of common excuses,” Lo says. “I’m going grocery shopping right now; my knees hurt; I can’t hear very well. It’s really rewarding when we are able to connect and get their story.”

A photo of Joyce Wing from the Chinatown Pretty blog

The project bears some similarity to Accidental Chinese Hipster, a blog that pokes fun at Asian fashion and its likeness to hipster style. Luu and Lo say their project is different. Chinatown Pretty focuses on beautiful portraits and subject interviews.  Lo says hearing people’s stories is as important as taking stock of their style.

“We often ask them how did you come to America?” Lo says. “And a lot of times they’ll talk about ‘oh well we made this shirt because we worked in a factory 30 years ago.’ It has revealed a lot about the history of Chinatown. And the immigration stories are really interesting.”

The women hope to expand the project beyond San Francisco. Their dream is to visit Chinatowns across the country — from Los Angeles to New York.

The Chinatown Pretty exhibition is on view in San Francisco’s Chinatown at 41 Ross Alley through February 28, 2016.

David Bowie, who died this week, was a well-known Japanophile, adopting many elements of Japanese culture into his stage performances.

“He was someone who knew how to express himself both with music and with fashion,” Japanese designer Kansai Yamamoto told the BBC.

“Someone like that may not be so rare these days, but he was one of the pioneers to do both.”

Mr Yamamoto, the creative force behind some of Bowie’s most iconic stage outfits, first got to know Bowie in the 1970s, when the singer was often visiting Japan, and trying to break into the US market.

“I don’t know why he was so attracted to things Japanese, but perhaps it wasn’t so much Japan or Japanese-ness itself. He knew when he looked good in something.

“When you wear something and you look really good… you feel confident and good about yourself. I think my designs and costumes had that effect on him.”

Helene Thian, a fashion historian and lifelong fan who has written extensively about Bowie, agreed. She said Bowie had often been noted as having had “this beautiful androgynous face and body, which suited Kansai Yamamoto’s unisex style”.

Bowie’s Japanese style had already been developing through his interest in Japanese theatre.

In the mid-1960s, he studied dance with Lindsay Kemp, a British performance and mime artist who was heavily influenced by the traditional kabuki style, with its exaggerated gestures, elaborate costumes, striking make-up, and “onnagata” actors – men playing female roles.

Bowie was a natural “shapeshifter“, says Ms Thian, and his training with Kemp and onnagata style helped him as he explored ideas of masculinity, exoticism and alienation.

He even learned from famed onnagata Tamasaburo Bando how to apply traditional kabuki make-up – its bold highlighted features on a white background are evident in the lightning bolt across the Ziggy face.

“It wasn’t trying to be literal interpretation” of onnagata, said Ms Thian, “but rather inspired by its gender-bending androgyny. That’s what makes it so powerful, it’s more evocative.”

Mr Yamamoto said he wasn’t sure why he and Bowie had such an affinity, but that “something resonated between us, something that went beyond nationalities, beyond gender“.

Through his style and performances, he said, Bowie “broke one sexual taboo after another“.

“What he did in terms of bridging the male-female gap continues to this day,” he said, including in the increasing acceptance of gay relationships in Japan.

Among his most famous outfits for Bowie was Space Samurai, a black, red and blue outfit adapting the hakama, a type of loose trousers which samurais wore and which are still worn by martial arts practitioners.

He also sometimes wore a kimono-inspired cape with traditional Japanese characters on it which spell out his name phonetically, but also translate to “fiery vomiting and venting in a menacing manner“.

It wasn’t just his appearance – references to Japan are scattered through Bowie’s music – his 1977 album Heroes even features the track Moss Garden on which he plays a Japanese koto, a kind of zither.

These days, an artist in Bowie’s position might be accused of cultural appropriation – stealing another culture for his own purposes – but Ms Thian says it was never seen that way in Japan.

“Bowie was born to be the ultimate diplomat and artiste,” she says.

“He took his creativity and fused it with his impulses to meld East and West and come up with a healing of the world in this post-war period.”

This was “a homage to Japanese culture and the Japanese loved it“, she said, as Bowie challenged the tendency of Western fashion at the time to lump all Asian styles together as “Orientalism“.

Indeed, Japan embraced Bowie back, and he remains an icon there, with his glam rock style influencing generations of bands and musicians.

Renowned rock guitarist Hotei Tomayasu, best known outside Japan for composing the theme for Quentin Tarantino’s Kill Bill films, told the BBC: “[Bowie] is the one who truly changed my life. My eternal hero and inspiration.”

Bowie is also known in Japan for his role as Maj Jack Celliers in the 1983 iconic film Merry Christmas Mr Lawrence, directed by the renowned Nagisa Oshima.

The film, set during World War Two in a Japanese camp for prisoners, pits Bowie’s character and another soldier against two Japanese officers, one of whom is played by the famous musician Ryuichi Sakamoto.

On Twitter, Sakamoto’s ex-wife Akiko Yano recalled how Bowie carried their young daughter – Miu – on his shoulders when the family visited the Roppongi neighborhood in Tokyo with Bowie in the 1980s.

Miu Sakamoto tweeted this picture of herself as a little girl shaking hands with the singer, saying she vaguely recalled meeting “a very beautiful man“.

“(He is) no more. A world in which David is not living still feels totally unreal.“

Italian luxury footwear designer Giuseppe Zanotti has teamed up with K-pop sensation G-Dragon for a capsule range of footwear. According to a report on WWD, the forthcoming collection will keep in-line with the Korean icon’s penchant for flamboyant fashion, and will include unisex loafer and a lace-up shoe. Both versions will be available in black with multi-colored glitter embellishing the upper, which sits atop of a lightweight rubber sole.

According to the Italian designer, working with G-Dragon is “something that we wanted to do as he is currently one of the biggest stars in Korea with a huge following in Asia.”

G-Dragon himself seemed pleased with the collaboration stating “These shoes turned out exactly how I wanted to. It’s not just girls or women who get excited and worked up over pretty shoes. I think guys can feel that way, too, and I think both will feel that way about these shoes.”

Designed by Japanese artist Kenjiro Sato, the organizing committee for the Tokyo 2020 Summer Olympic and Paralympic Games has just unveiled its official logo. With its focal point revolving around the letter T, the Olympic emblem looks to represent equality with its precise design.

“The red of the circle represents the power of every beating heart,” says the organizing committee, and that it “reflects the vibrant nature of the city and the welcoming spirit of its citizens,” added Sato.