Called the DC Superhero Wayang Kulit Exhibition, Tintoy Chuo and his Fusion Wayang Kulit first came into prominence when they first performed Peperangan Bintang (the direct Malay translation for Star Wars) back in 2013. 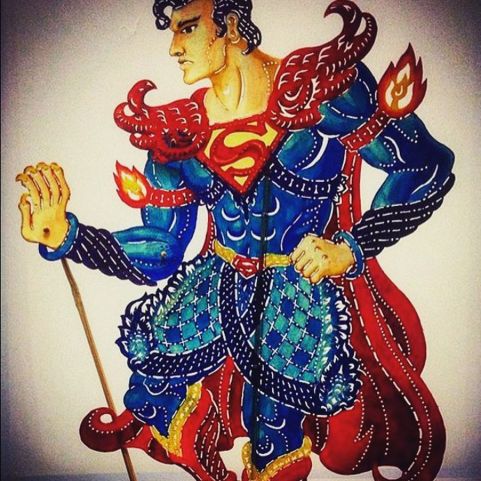 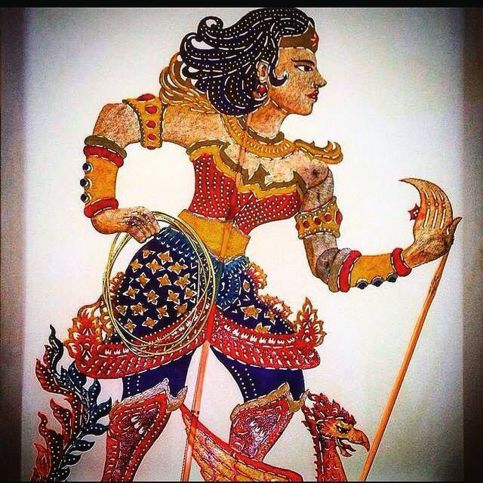 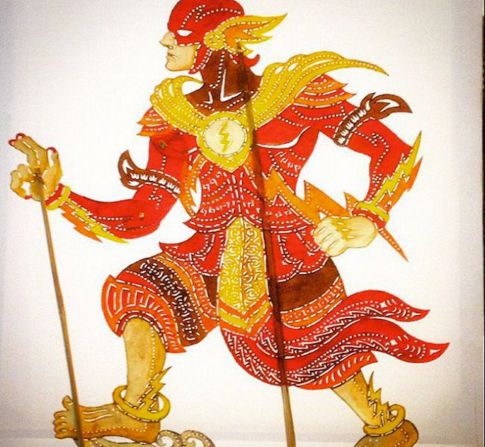 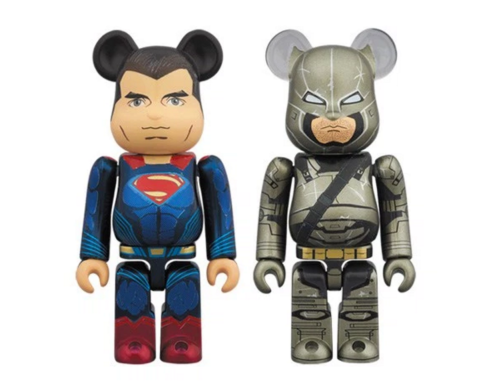 With the highly anticipated Batman v Superman: Dawn of Justice film set to hit theaters next March, Medicom Toy has unveiled a set of 100% Bearbricks to get fans excited for the forthcoming release.

Featuring Superman in his modernized hero suit and an armored Batman, each figure measures in at the standard 7 cm size. The Dawn of Justice pack comes with both Bearbricks as a set and retails for ¥3,000 JYP (approximately $25 USD).

You can cop this limited edition offering at Medicom Toy online.

Not all Asians look the same.  I repeat, not all Asians look the same. It seems no matter how many times we say it, people simply assume that all Asians share the same physical features. Some believe we all have the same body structure and others even think we all have the same kind of hair. Of course, we know this is absurd. We know that there are plenty of ethnicities which categorize under the umbrella term “Asian” and we know there are plenty of Asians who are of mixed race. So why do people think all Asians look the alike? Well it may have a thing or two to do with media’s portrayal of Asians. If audiences have only been exposed to a very particular type of Asian, how can they know we’re all different? This lack of exposure may be the very reason many celebs who are bi-racial or multiracial are often overlooked in the Asian community. Even if they don’t necessarily “look it,” all of the following celebrities are Asian.

Check out this list of 20 Asian celebs you probably didn’t know were Asian.

3)  Chad Michael Murray of One Tree Hill  is a quarter Japanese.

4)  Dean Cain, superman of the TV series, Lois and Clark: The New Adventures of Superman is a quarter Japanese.

5)  Nicole Scherzinger of PussyCat Dolls is half Filipino.

6)  Keanu Reeves of The Matrix is a quarter Hawaiian and a quarter Chinese.

7)  Darren Criss of the TV series Glee is half Filipino.

9)  Tyga, the rapper, is half Vietnamese.

11) Enrique Iglesias is half Filipino.

12)   Piper Curda of the Disney Channel show I Didn’t Do It is part Korean.

13)   Mark-Paul Gosselaar, aka Zack Morris of the 90’s hit TV show Saved By The Bell, is a quarter Indonesian.

14) Kristin Kreuk of the TV series SmallVille and Beauty and the Beast is half Chinese.

15) Kelsey Asbille Chow of the MTV series Teen Wolf  and The Amazing Spiderman is part Chinese.

16)   Host of the TV show Lip Sync Battle and model, Chrissy Teigen is half Thai.

17)  Rob Schneider of Grown Ups and The Hot Chick is a quarter Filipino.

18) Chanel Iman, the Victoria Secret Angel and model is half Korean.

19) Model Karrueche Tran is half Vietnamese.

20) Bérénice Marlohe from the famous Bond series, SkyFall is part Cambodian and Chinese.

Last year, Marvel announced efforts to broaden the diversity of their superhero lineup; only to run their main Marvel universe through the shredder this year and possibly erase all those gains. Meanwhile, both DC and Marvel have been criticized that even when they elevate the profiles of non-White and non-male superheroes, previous efforts have stumbled due at least in part to failures to implement behind-the-scenes diversity initiatives; thus, earlier announcements have come across as transient pandering that lacks connection to the actual experiences of women and minorities while failing to produce opportunities for minority creators.

Last week, DC announced its own radical shift that would be taking hold of the DC superhero universe in the coming months. No, not another Crisis: DC announced a major roster change in the creative teams behind several ongoing titles as well as the launch of several new books, all with the general goal of “broadening” the focus of the DC universe. In layman’s terms? DC is diversifying their superheros, and it turns out that they’re going to do it the right way: behind-the-scenes as well as in front.

MarySue is all over the news, highlighting the launch of two new titles that feature strong female superhero protagonists –– Black Canary and Starfire. This will be Starfire’s first solo title, and notably, she’s received a costume redesign that (finally) covers her top half (although, of course, she’s still wearing booty shorts).  In addition to a limited run Harley Quinn/ Power Girl (which may feature the new Power Girl, Tanya Spears who is Black and also apparently awesome) miniseries, these newly launched female-led titles will join ongoing series featuring Catwoman, Harley Quinn, Batgirl and Wonder Woman, making DC’s newly announced efforts one of the most inclusive comic lineups with regard to women.

With regard to racial diversity, a few (but not that many) characters of color will also be promoted to solo title status; most notably, Cyborg will get his own series, written by current author of Shaft, David Walker. The cover of We Are Robin also features several Robins, including both women and people of colour. The new title, Midnighter, will focus on a gay male lead character.

But the real news here is what’s going on behind-the-scenes: DC’s newest slate of creative teams features an almost unprecedented number of women and minority creators. For the New 52 relaunch, less than 1% of DC’s writers were women. In this new announcement, six women (or 17% of all writers, a big deal in the traditionally male-dominated comics industry) will be women. Even more importantly, several of the female writers will be writing female protagonists: Meredith Finch will be writing Wonder Woman, Gail Simone will continue her work on Secret Six (which includes several female characters), Amanda Connor will co-write Harley Quinn, Starfire, and the Harley Quinn/Power Girl mini-series, and Genevieve Valentine will write Catwoman.

Today’s announcement is also a big deal for Asian American comic book writers and artists. Greg Pak, who has done phenomenal work for both DC and Marvel, will be continuing to write Action Comics and Superman/Batman. The big news is that Gene Luen Yang, author of several award-winning comic books including American Born Chinese, Boxers & Saints, and The Shadow Hero will be making his DC Comics debut to take over the ongoing Superman series. DC reports that Yang will be charged with helping to depict Superman “in a more contemporary light”. Ming Doyle, one of the industry’s few Asian American female talents, will also be joining Constantine: The Hellblazer as a writer, and Dark Universe as an artist.

Teamed with artist John Romita, Jr., Yang will be the first Asian American to write the tale of DC Comics’ flagship superhero in his eponymous title; this is also symbolic because Superman’s story — with its immigrant narrative overtones — has long spoken to Asian American fanboys. As Will West put it:

This is a pretty big deal. An Asian American is writing the American Dream superhero.

(Of course, Pak has been writing Superman through both Action Comics and Superman/Batman or some time, but you get the gist!)

Yang’s writing is just superb and stellar; I’ve been a fan for years. I haven’t been buying comics in a number of years; the addition of Yang and Doyle to a writing staff that already includes Pak’s strong work is making me change my mind on that decision.

“This heralds in a new era for the DC Universe which will allow us to publish something for everyone, be more expansive and modern in our approach and tell stories that better reflect the society around us,” said DC Entertainment Co-Publisher Dan DiDio.  “Whether you’ve been a DC fan your whole life, or whether you are new to comics – there will be a book for you beginning in June.”

Prints of Khoa‘s volume one and two posters are available to purchase online at Hero Complex Gallery.

Two things that really flourished during the ‘50s: illustration and comic books. Toronto-based artist and illustrator Michael Cho has perfectly combine those two trends in deliciously retro fashion, creating handmade fan art the old fashioned way. Featuring your favorite heroes of yesteryear – from Superman and Thor, to Batman and Ironman – his work is exceedingly positive and makes you feel that all is right in the world… and if it isn’t, he’ll show us who to turn to.

Much of Cho’s work breaks the digital mold, being created with the tools of the past – pens, pencils, watercolors and gouache – for that truly retro feel. His color palette is limited and communicates with bold strokes of black detailing. To get the often dynamic scenes composed just right, he often creates multiple sketches of his work before creating a final image.

Other themes Cho has followed include series’ featuring famous NBA stars, plenty of retro sci-fi, and a fantastic collection of Toronto back alleys (who knew they could look so inviting?). See more at his website or follow him on Twitter.

Self portrait with family:

Check out the link:

Is it considered graffiti if the design was made by cleaning something? This question is raised by a series of extraordinarily talented illustrations done by entrepreneur Allen Wong in front of his house.

It all started when the homeowners’ association in Wong’s town demanded that he power-wash his sidewalk. Fed up with their constant regulation of his property, Wong decided to stick it to the man by agreeing to their demands – with a catch. He power-washed his entire sidewalk with the exception of the silhouettes of a few of his favorite characters – Superman, Calvin and Hobbes, and Totoro.

His illustrations received much praise when he posted them on Reddit, but he will probably have to remove them – “This is the same town that when a kid drew a penis on a park bench, it went in the town’s newspaper. I’m just going to enjoy these pieces while they last before I have to wash it out,“ wrote Wong.

While the blue tape stencils pictured below are nice, they will only help minimally if you try to re-create Wong’s stunt. “The blue tape you see in the pictures didn’t stand a chance against the pressure washer. I had to draw the pictures freehand by memorizing where the tape used to be after I blasted it away section by section,” wrote Wong. 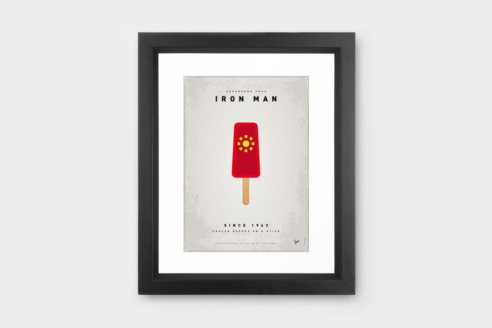 Netherlands-based creative director Chung Kong presents a fun poster series that combines his impressive design skill with his apparent penchant for comic book super heroes. For his ‘My Super Hero Ice Cream Series‘ he turned your favorite comic book character, such as Batman, The Incredible Hulk or Captain America into tasty frozen treats.

Unfortunately, the posters are currently not available for purchase, however, there are loads of more to chose from in his web store. 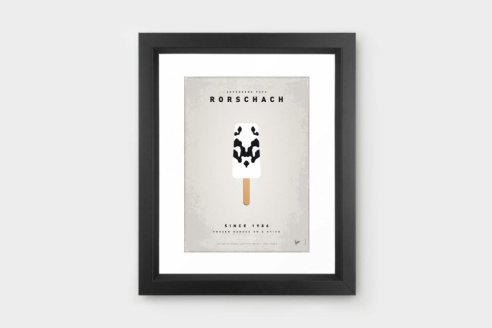 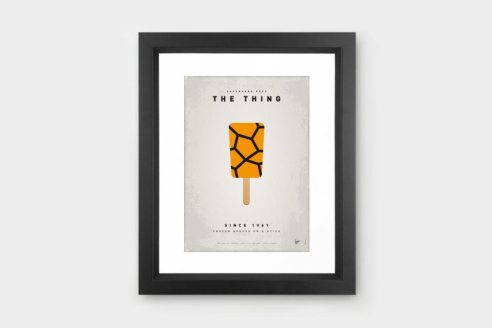 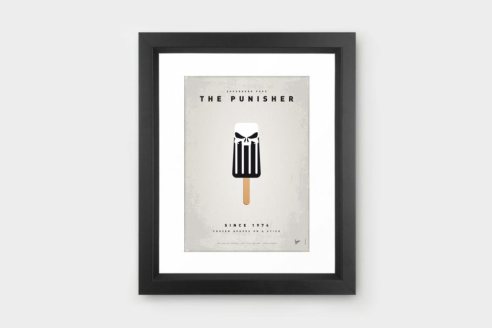 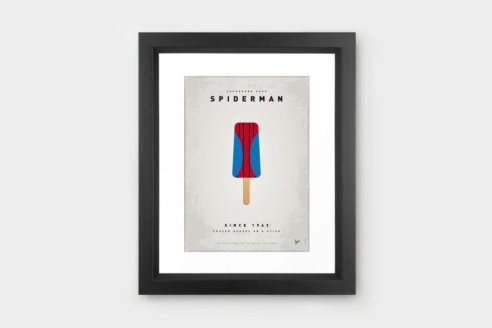